What kind of technologies do the governments and militaries of the world possess? What highly classified project have the public been blissfully unaware of? Anti-gravity? Death rays? Cloaking devices? Telekinetics? Telekinesis? Alien contact?

Well, we’ll leave all those questions to the conspiracy theorists and sci-fi aficionados among us. But there is one, very interesting story that, despite the facts and testimonies presented against it, has a hold on people’s imagination It is the story of when the U.S. destroyer escort USS Eldridge supposedly disappeared: The Philadelphia Experiment.

Depending on who you ask, all of this is a deluded hoax or the U.S. Navy either found a way to bend light around an entire ship or managed to teleport it to Norfolk Virginia and back. The alleged incidents took place in the mid to late 1943 in the Philadelphia Naval Shipyard.

Supposedly, there were eyewitnesses aboard the SS Andrew Furuseth in Norfolk who saw the Eldridge suddenly appear for a few moments, and then vanish again. Allegedly, there were witnesses who claimed two sailors (supposedly crewmen who had been onboard the Eldridge at the time of the experiment) miraculously disappeared into thin air during a bar fight in Philadelphia. Books and movies have been produced pouring over the events of the Philadelphia Experiment with varying claims to fact or fiction and even a History Channel special dedicated to explaining the events, and the layers of questionable sources involved in explaining the story and where it came from.

Many skeptics point to experiments conducted by the Navy at the time, which were attempting to reduce the magnetic field of their ships and thus avoid attracting and triggering torpedoes and mines in a process called ‘degaussing.’ Hence, the “invisibility” and bending the electromagnetic fields claims. This research was conducted at the Philadelphia Naval Shipyard. Also in the realm of electromagnetic phenomena, the USS Timmerman hosted experiments with a high-frequency generator that produced corona discharges.

Skeptic or believer, however, both point to the same genesis of the story growing in popularity: the mysterious encounters had by the astronomer, theorist, and researcher Morris K Jessup 1955-57.

After the release of his book, The Case for the UFO in 1955, Jessup began receiving letters from a man named Carlos Allende. There were multiple return address, all which lead to dead-ends like an abandoned farmhouse.

In the letters, Allende talks about references in Jessup’s book to Unified Field Theory and how it must be investigated more. Allende claimed that Einstein had actually completed this theory, relating gravity and electromagnetic forces and that the Navy was using it.

Allende also claimed that he was aboard the Andrew Furuseth and witnessed the shocking appearance and disappearance of the Eldridge. Also, one letter stated that Allende was present at the Philadelphia bar and watched a sailor disappear.

Allende also provided details of the strange happenings, even horrors of what befell the crew of the Eldridge. One can now find stories of crew members reappearing with the ship, but fused into parts of it, totally atomically merged. Another tale is of crew members becoming “stuck” in time, unable to move unless a comrade reached out and physically touched them, returning them to mobility. Yet more crew members supposedly went insane.

Jessup was somewhat intrigued by this strange correspondence and wrote back for more information, evidence, and perhaps the testimony of others. Allende declined to provide any of these and Jessup began to dismiss the stories as odd tales.

But then things got quite a bit stranger for the poor astronomer and ufologist. According to James Moseley and Karl Pflock in their 2002 book on ufology called Shockingly Close to the Truth!: Confessions of a Grave-Robbing Ufologist, Jessup was visited by the Office of Naval Research in 1957. The ONR officials presented him with a copy of his own book, The case for the UFO, which had been sent to them in an envelope marked “Happy Easter.”

The copy of the book contained a vast number of annotations from three different people. One of the individual’s handwriting Jessup was able to identify as that of Allende. The annotators called themselves “Gypsies,” spoke of the UFOs and physics mentioned in the book, as if from a place of superior or alien knowledge, and referenced at least two kinds of people/beings living in outer space.

Regardless of stories surrounding these men, the Eldridge, and UFOs, Jessup did receive letters from Allende and the ONR did receive that annotated copy of Jessup’s book. They were interested enough in it to commission Varo Manufacturing Company to print them several copies. A more recent edition of the same annotated version of the text is now available online. Curious reading, indeed. 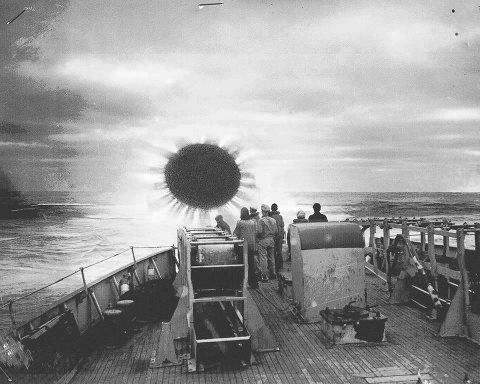 Jessup, after a couple more attempts at other books, which were not popular, was left by his wife in 1958 and fell into a deep depression. When he was found dead in 1959, it was ruled a suicide.

Multiple skeptics looking deeper into this strange story have traced the figure of Allende back to a seriously mentally ill man. Furthermore, the Eldridge itself was not even finished being built (in New York, nonetheless) until July 1943 and was sailing in the Bahamas in October of that year, not shattering the confines of space and time in the Philadelphia Naval Shipyard. But ship logs can be forged, a believer might say.

In 1999, a reunion of veterans who had served aboard the Eldridge were interviewed by a Philadelphia newspaper and found the entire idea laughable, that they never even made port in Philadelphia. One crew member did, however, joke that it was true the crew was a little crazy.