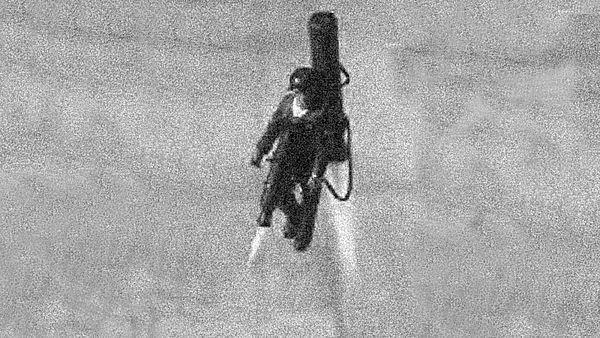 The story of the jetpack began sometime in the 1920s, when sci-fi literature and comic books became popular. At that time, commercial flight was virtually nonexistent, with airplanes being the toy of choice for the military and flight pioneers.

As with any pre-war gizmo, the jetpack started being seriously looked into when the biggest conflict mankind ever knew erupted. The second World War was the perfect medium for the jetpack to develop, even if only one presumably functioning, yet unsuccessful model, has been built.

The efforts which started with the army continued after the war in the private sector, with several companies developing jetpacks. For most though, the jetpack remained in the realm of “what if.” It can be done, it can be made to work, but it will never do.

There are no actual photos of the HimmelsturmerIn the final years of the second World War, the Nazis were losing ground, plenty of men and, why not, their minds. In an effort to turn the tide once again, the German scientists were put to work to develop what at the time were considered insane technologies (most of their research turned however into major breakthroughs in technology after the war). The V flying bomb with its Argus As 014 pulse jet engine is the perfect example of a technology which had little impact on the outcome of the war, but was the stepping stone for the space exploration which started in the 1960s.

At about the same time the V bombs were being developed, scientists and engineers began considering strapping a downsized version of the Argus As 014 on the backs of Germany’s soldiers.

The idea was to send soldiers, mostly from the engineering corps, over enemy lines without using the big, noisy, easy to hit transport airplanes. By being hard to spot, because of its size, and highly maneuverable, the Himmelsturmer (Skystormer) would have been the perfect tool for precision hits, sabotage missions and commando actions. The jetpack, if it can be called that, used two low-power rockets to allow the wearer to jump (very high and for long distances) rather than fly.

The “Himmelstürmer” (Sky Stormer – but literally Heaven Stormer) flight pack was an experimental project that would allow German combat engineers and infantry to cross bridgeless waters, minefields, barbed wire, and other obstacles without hindrance. As such, the device had to be for short duration “jumps” of ranges up to 50-70 meters. This was not meant to be a individual flying machine to achieve any sort of altitude or long flight journey, so emphasis was placed on finding a suitable type of propulsion to accomplish the limited jump range.

The Schmidt pulse jet seemed ideal for this, but since a pulse jet cannot operate without forward airspeed, the units involved were adapted and force-fed oxygen by a separate oxygen tank.

Paul Schmidt patented his pulse jet design in 1931 but the unit involved here should not be confused with the V-1 flying bomb Argus-Schmidt pulse jet. These Schmidt pulse jets were small pulse tubes able to be carried by one man.

The apparatus involved strapping on two Schmidt pulse tubes – one on the back for forward flight and a smaller, less powerful unit carried ventrally for simple control with hand grips for steering. 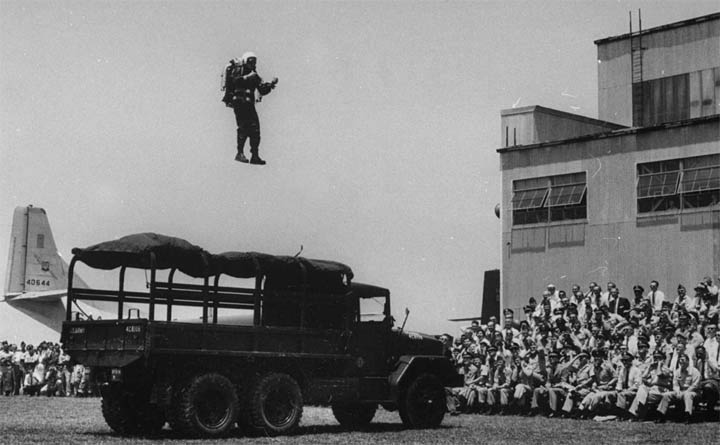 Himmelstürmer Flightpack
Both pulse tubes had to be ignited at the same time to enable proper jumps. The units consumed 100 grams of fuel per second. Flight duration was minimal and both units had to be turned off immediately upon landing.

These devices were tested with a Heer unit in late 1944 but were still in the experimental phase once the war ended. One of the devices was reportedly taken to the US and handed over to Bell for tethered experimentation (as no US test pilot wanted that duty!) Deemed as unsafe, the Himmelstürmer unit was disposed of as Bell sought out a new way to equip US Army soldiers with a flying unit.

By 1958 Bell had started its own development of a “Jump belt” design under “Project Grasshopper”. This unit used canisters of nitrogen for limited propulsion but the device proved impractical and was ultimately dropped.

After the failure of the Grasshopper Jump belt experiments of 1958-59 Bell employee Wendell Moore designed his famous Rocket Belt in 1960. It could enable flight for 20 seconds!

But unlike the Schmidt pulse tubes, Moore’s Rocket Belt used a chemical reaction to produce high-pressure steam at 1,375 degrees Fahrenheit which was then channeled through two bent-downwards insulated tubes behind the operator’s back to produce roughly 300 lb thrust, enough to enable short flight. Even so, a heat-resistant flight suit is required whenever flying this unit.

The German pulse tube operation required no special protective gear as they were designed only for combat engineers and basic infantry as emergency equipment. Wherever possible plastics were used for the fuel bottle units and complexity of design kept to a minimum. Thrust from the units was of short duration and directed outwards from the user to prevent accidents. Test pilots were instructed to start with very short hops and then slowly advance to sustained jumps, usually no more than 50 meters. But some pilots pushed the units up to 70 meters.

The Himmelstürmer was not meant to be mass-produced for the German Army but as specialty equipment for certain combat scenarios involving obstacles.

Although rumors of “Fliegende Sturmtruppen” (Flying Stormtroopers) was spread about no further advanced development of these units was planned for wider usage by the Wehrmacht. Bell ultimately succeeded in a limited duration working flying pack but the inspiration came from the German World War II Himmelstürmer.