The forces of Nazi Germany are infamous for the atrocities they committed. The SS, who played a dual role, both acting as frontline troops and running the death camps which would become such a terrible stain on the history of Europe. The SS and their leader, Heinrich Himmler, were responsible for many atrocities.

Though they committed their greatest atrocities on the Eastern Front, war crimes were also committed against Allied troops in the west. The most infamous of these crimes happened under Joachim Peiper, during the Battle of the Bulge. 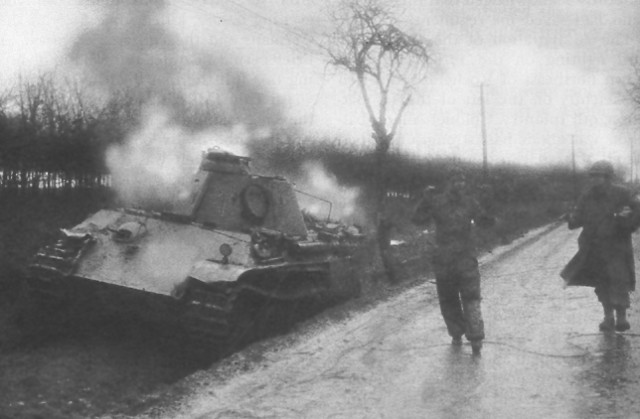 Launched in December 1944, the Battle of the Bulge was the last gamble of a German army trying to hold back the Allied advance, and Hitler’s final attempt at a Blitzkrieg attack that had once brought him such success. Emerging through the Ardennes, the Germans attacked a weak point in the Allied line, hoping to break through, split the American and British armies, and force those two nations to the negotiating table.

It was a desperate move by a government on the retreat and a leader who must have feared that defeat would mean death. But it was not enough. The lack of resources that plagued the German army stalled the advance, as they ran out fuel and new forces to throw into the fight.

The main thrust of the battle came from two tank armies – one of the regular German army the other a part of the infamous SS.

Among the SS Panzer troops was Kampfgruppe Peiper, a unit of 140 tanks together with a battalion of motorized infantry. Joachim Peiper was in command, a highly decorated SS officer of equivalent rank to a lieutenant colonel.

Peiper embodied the strain that the German army was under, and the terrible things of which it was capable. While serving on the eastern front, he had been responsible for several atrocities against Russian troops and civilians, including the burning down of the village of Krasnaya Polyana and the massacre of its inhabitants. Captured Germans reported that Peiper relished the opportunity to burn down Russian homes. A similar village burning by his troops in Italy led to other German forces adopting this tactic causing widespread death and devastation.

The war was taking its toll on Peiper. Rushed to the western front following the Allied D-Day landings, he became burnt out psychologically and had to be evacuated. He was officially suffering from jaundice, but the truth was that he had had a nervous breakdown.

By the time of the Battle of the Bulge, he was back in a position of command. Peiper was a man who embodied the mentality of many German troops, especially in the SS – stressed, desperate and desensitized to the use of terrible measures.

As in Russia, SS troops, and in particular Peiper’s men, tried to intimidate the enemy through brutal actions. Captured American prisoners were murdered at Ligneuville, Stavelot, Cheneux, La Gleize, Stoumont and Wereth. Near Bullingen, Peiper forced POWs to refuel his tanks and then shot them. At Honsfeld, his men murdered and then robbed the bodies of 19 Americans.

The crimes of Peiper and his men were not reserved for enemy combatants. They also killed Belgian civilians. Later investigations eventually attributed 473 murders to the unit – 111 civilians and 362 POWs.

The largest massacre of POWs was at the Baugnez crossroads, two miles southeast of Malmedy.

Here Peiper’s tanks captured an American convoy after immobilizing the front and rear vehicles. Armed only with small arms and rifles, the American troops surrendered. While the German armor continued its advance, around 120 Allied prisoners were gathered in the open in a field, including those taken from the convoy and others captured earlier.

What exactly happened next has been disputed. Some witnesses said that some of the POWs tried to grab their guns or to run away. Others said that the Germans opened fire with no reason or warning.

Regardless of their reasons, the SS troops opened fire on their prisoners with machine guns. Not content with mowing them down, they then walked among the fallen, executing any who remained alive.

Some of the prisoners fled to a café. The Germans set fire to the building, and anyone who tried to avoid a terrible death in the flames was shot as they emerged.

Of the prisoners gathered at the Baugnez crossroads, 86 were killed.

The string of crimes committed by troops under Peiper’s command became known as the Malmedy Massacre.

The aim of such brutal tactics had always been intimidation – to scare the enemy so that they would not resist. It was the same tactic by which the SS had helped Hitler to rule Germany – using terrible violence to eliminate opponents and scare the rest into surrender. In the Battle of the Bulge, it proved entirely counterproductive.

The Americans were powerful and had a formidable army. They were an invasion force with greater numbers and resources than the SS could bring to bear. The massacres did not make them afraid – they made them angry and wanted revenge.

As word of the war crimes spread, the willingness of American soldiers to kill their German enemies increased. On 21st December, one infantry regiment gave out an order that SS troops and paratroopers were not to be allowed to surrender, but should be shot on sight. It was a principle that many soldiers followed on an ad hoc basis, venting their anger over Malmedy. There were allegations of organised massacres of German POWs, which the American government denied. Such was the anger that orders had to be given for SS officers to be taken alive so that they could be questioned.

Many of those involved in the Malmedy massacres were eventually tried though they were released following allegations of irregularities in the trials. Peiper was murdered in 1976, and though the perpetrators were never caught, it is assumed that his past had caught up with him.