For many young people, the outbreak of the greatest War this planet had ever seen would come just a little too early for them to get in on the action.  But Jacklyn Lucas was not just any young person. This is the story of the man -actually a boy – who enlisted in the United States Marine Corps in 1942 at age 14.

We could go on to call him a boy throughout his entire Marine Corps career, but when you are awarded the Medal of Honor as a minor, you get the benefit of the doubt to be called a man.  For when an entire nation overcame what would seem like insurmountable odds at times, why a let little old thing like age hold you back from taking your place in the halls of military history.

Born in Plymouth, North Carolina in 1928, Jacklyn Lucas would attend Edwards Military Institute where he would not doubt nourish his desire to join the United States Military.  Proving to be an all-round athlete, he was captain of the football team and took part in just about any activity you could call a sport.  His physical training would play a significant role in his ability to enlist at such a young age as, by the time he was only 14 years old, he stood 5’8” and weighed 180 pounds.

Lucas then took this stocky frame, paid off a notary to swear that he was 17, and headed to his local recruiter who would ship him off to Parris Island.  Not surprisingly, the young Lucas excelled at training due to his athletic ability and determination.  No one was the wiser, and young 14-year-old Lucas became a United States Marine.  After additional training, he was then sent to Camp Caitlin on the island of Oahu Hawaii. In November of 1943, Lucas was sent to Hawaii and found himself one step closer to reaching his dream of seeing combat with the Marines. That was until a military censor read a letter home to his girlfriend which let them know he was in fact only 15 years old. The Marines threatened to send him home, but when he told them that he would just join the Army they relented and allowed him to stay in Hawaii driving a troop transport truck.

Furious that he had been removed from his combat unit, Lucas spent the next year fighting with other Marines and proving himself less than a stellar garrison Marine.  But the same kid who didn’t let the rules stop him from enlisting was not about to let them keep him out of combat when he was this close.

On January 10th, 1945, a 17-year-old Lucas decided now was the time to act as he walked away from his camp with a pair of boots and set of fatigues determined to find his way into a combat unit.  At Pearl Harbor, he found his way onto a Higgins boat ferrying Marines to their troop transport ships and managed to stow away on the USS Deuel as it steamed away for the one and only Iwo Jima.  If Lucas was determined to see combat, then he had just struck combat gold.

His garrison unit back in Hawaii was less than thrilled and reported him as a deserter and reduced him in rank to private.  As the USS Deuel drew closer to its destination, Lucas turned himself in on February 8th, 1945 and much to his delight was assigned to a combat unit for coming battle on Iwo Jima.  After all, why to waste a waste a good Marine when a ferocious battle awaited.

A few days later, Lucas turned just 17 years old and within a week, this young man would distinguish himself in one of the fiercest battles of World War 2. 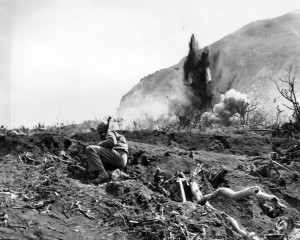 The battle of Iwo Jima began on February 19th and by the 20th, Lucas and his rifle squad were approaching an airstrip northeast of Mount Suribachi. Under heavy Japanese fire, they took cover in a trench with the Japanese a short distance away in another.  17-year-old Lucas shot and killed two Japanese soldiers before noticing that two grenades had landed in close proximity in the trench.

Rather than flee for cover, this young Marine jumped on not one, but two grenades to shield his fellow Marines. One grenade exploded while the other failed to detonate and 17-year-old Jacklyn Lucas miraculously, or just in keeping with his character, survived.

After breaking the law by forging his age, defying Marine Corps regulations by racking up 17 convictions, and being declared a deserter, Lucas was awarded the Medal of Honor for his actions that day on Iwo Jima.  With more than 200 bits of metal in his body, his wounds were severe and required multiple surgeries and an extended recovery time.

Declared physically unfit for military service due to his wounds, he was finally discharged from the Marines and returned home to North Carolina in September of 1945.

Fittingly, his military convictions were all wiped clean before receiving his Medal of Honor on October 5th, 1945 right next to other legendary Marines such as World War II Ace Gregory “Pappy” Boyington.  Lucas would go on to try his hand at civilian life before joining the Army in 1961.

Despite completing paratrooper training, Lucas was denied the opportunity to see combat in Vietnam and unsurprisingly decided he was done with military life.  A truly remarkable life, heroic by any standard, and regardless of his age, this boy deserves the full title of man and every bit of respect that comes with it.

For if you had any doubt, just take a step back and reminisce what you were doing at age 14.