Operation Market Garden, it is September 24th, 1944 and we are on the 6th day of the ill-fated operation. Earlier that day the Germans tried to attack through Eerde but were repulsed, they now sideslip Eerde and capture part of the corridor.

Follow the story of the reopening of the corridor as we continue our TWO part series (Read part one).

The Germans Cut The Corridor 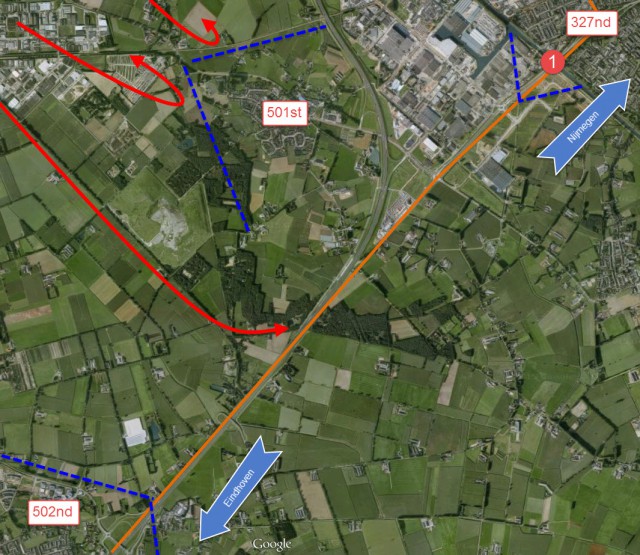 Around 16:00h, as the fighting around the sand dunes in Eerde are winding down (see part 1 of this story) the Germans are approaching the Corridor (Hells Highway) in between Eerde and Sint Oedenrode.

The force that is supposed to be in reserve and to follow up the 6th Fallschirm (paratroop) regiment is now leading the attack. These are commanded by Major Jungwirth and the Kampfgruppe (battle group) bears his name. They are followed up by 3 Jagdpanthers of the 559th Heavy Panzer Destroyer company.

The 502nd Parachute Infantry Regiment at Sint Oedenrode spots them as they approach the corridor and immediately sound the alarm. Two companies are sent forward to intercept the Germans but they arrive too, the Germans are in possession of the road again. 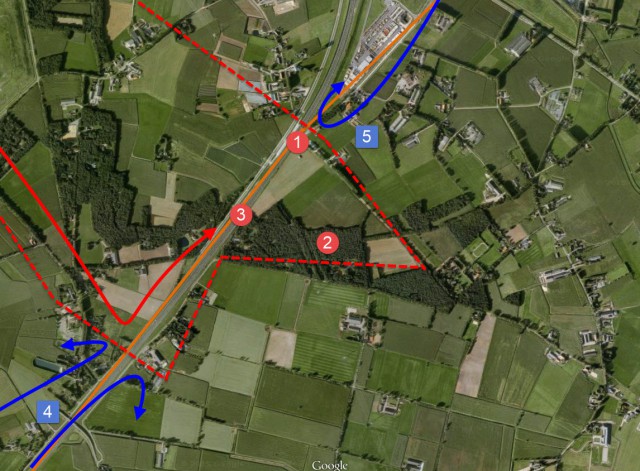 Immediately after the Germans capture the road they run into a truck column driving south and it is completely shot up (at 1), most drivers abandon their vehicles when the first shots are fired and manage to get away in time.

The Germans start to dig in in the Logtenburg forest (2) whilst the Jagdpanthers patrol what was a couple of hours before the lifeline to the allied troops trying to reach Arnhem (3).

The allies respond immediately and the first counterattacks (4) are launched within the hour by companies C and H of the 502nd Parachute Infantry Regiment but are repulsed with the help of the Jagdpanthers.

From the north another counter-attack is launched by 3 Sherman Tanks of the 44th Royal Tank Regiment, all 3 are quickly disabled when the come face to face with the Jagdpanthers. Later the Germans manage to get two operational again, causing massive confusion among the allies.

The last counterattack is launched at 18:15 from Sint Oedenrode (4), this time by a British reconnaissance regiment which had a squadron of Sherman tanks. After only a couple of 100 meters progress and losing one tank they abort the attack, it is by now getting dark and the situation is much too confused.

During the night more and more Germans make their way onto the corridor, they take with them 88mm Dual Purpose guns and Renaults of a Anti-Tank unit. Eventually, the German force swells to over 200 soldiers which now control a vital part of the Corridor. 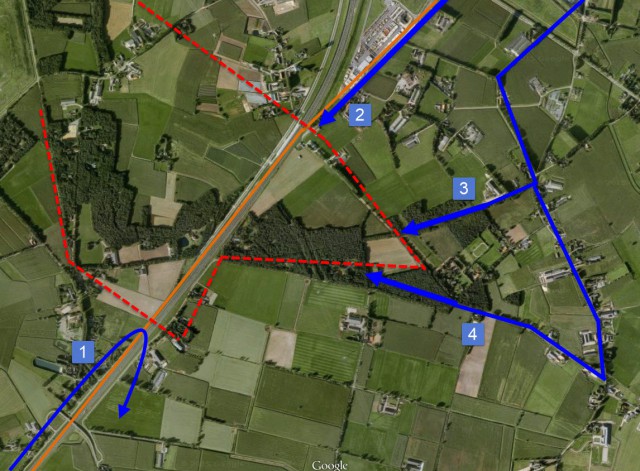 September 25th dawns and things do not look good, this latest cutting of the corridor to Nijmegen is the end of Operation Market Garden, the decision is made to evacuate the British 1st Airborne from Oosterbeek that night. However, the priority for the Allies this day is to reopen the corridor before the troops fighting up North run out of food, ammunition, and petrol.

During the night the 506th Parachute Infantry Regiment, that had just arrived in Uden is notified that they are to move south immediately to help reopen the corridor.

By chance, next up in the mighty XXXCorps column is the famous 7th Armoured Division, the Desert Rats. Together with 2 companies of the 502nd, they launch the first attack of the day from Sint Oedenrode (1 but they do not make much headway.

The next attack is launched by the 1st Battalion of the 506th (2) which at first make good progress but come under increasingly heavy fire from the Germans. The 3rd Battalion of the 506th also launches their attack (3), using the back roads to outflank the enemy. Unfortunately, their attack is stopped as well and they are forced to dig in. Both attacks are supported by Sherman tanks of the 44th Royal Tank Regiment.

Finally, the 2nd Battalion, which was held in reserve for a possible breakthrough, is sent into the attack. Using the same roads as the 3rd Battalion but making an even wider turn they attack the Germans from the east. One of the accompanying Sherman tanks is destroyed by a Jagdpanther and this attack bogs down.

The German use of the captured Sherman tanks causes considerable chaos as time and again the assumption is made that it is a friendly tank. Eventually, one of the Shermans is recaptured by A-company of the 506th and returned back to allied use. 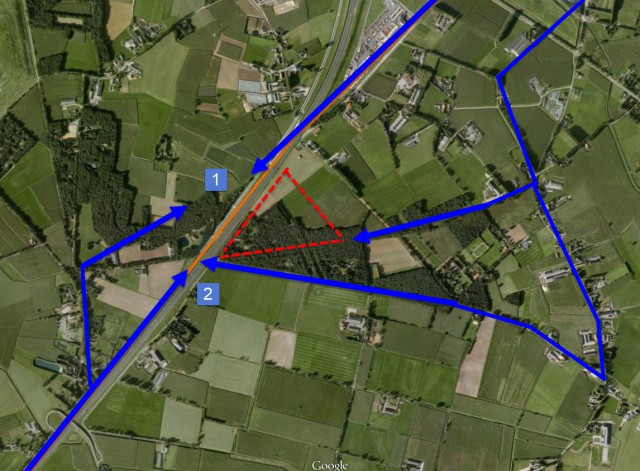 The Allied attacks continue throughout the day and finally, progress is made, first H Company of the 502nd supported by elements of the British 50th division makes contact with the 1st Battalion of the 506th (1).

Later other units of the 502nd meet up with the 2nd Battalion of the 506th (2). The Germans are surrounded but still control a small section of the road. 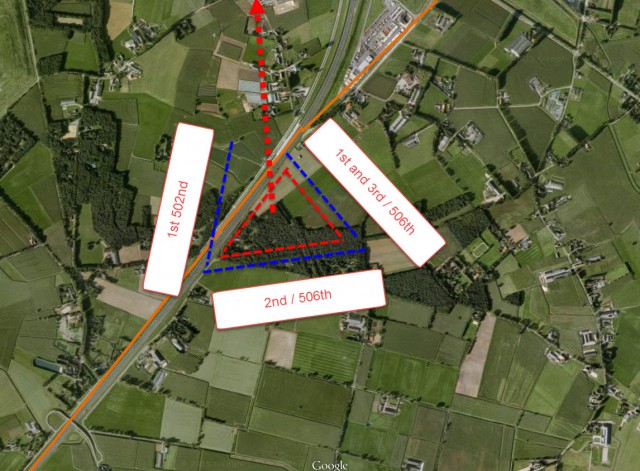 During the night of September 25th / 26th as the British are evacuating Oosterbeek, the Germans decide to evacuate their positions in the Logtenburg forest too. They are virtually surrounded, no ammunition can reach them and their tasks is complete, whilst they did not reach the Bridges at Veghel they managed to block traffic during the most critical phase of the battle.

In the middle of the night the Jagdpanthers towing the 88mm Anti-Tank guns together with all German soldiers march north and out of harm’s way. When the Americans and British forces resume the offensive at first light they find the position abandoned.

This does not mean that the road can be reopened immediately, the Germans mined the roads and boobytrapped the wrecks and it takes Sappers and Engineers hours before traffic resumes. Only at 14:30h does traffic resume, but by this time Operation Market Garden has ended.