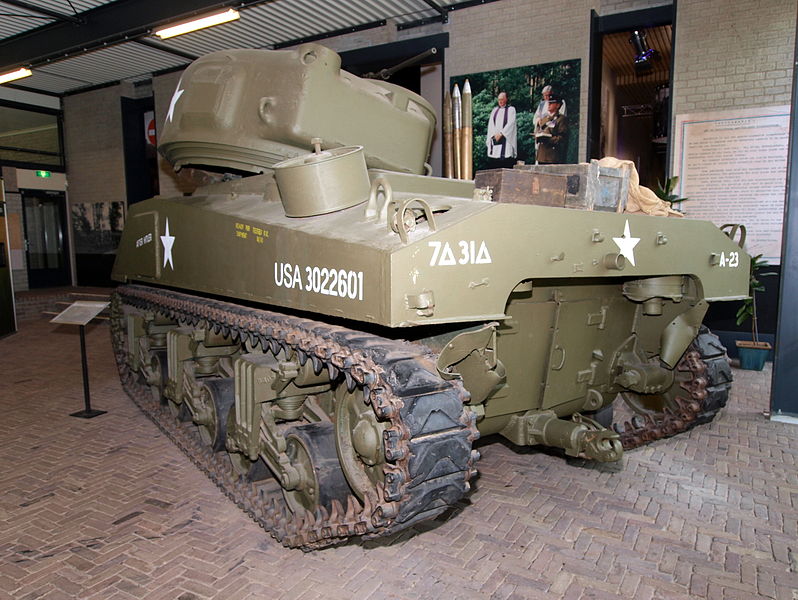 Myths about the role, and perceived anti-tank capability of the M4 Medium, continue to be pervasive.  The idea that US tanks were not expected to be able to deal with any tanks that they may happen to come across just won’t die, and is probably a reflection of the name of the US Tank Destroyer branch which is confusing to those who don’t understand the doctrinal function of the TD. See the Can Openers article for a slightly more in-depth look.

We know that the idea of adding the 76mm to the M4 pre-dates the introduction of the German cats. We also know that even without the 76mm the US Army as a whole wasn’t proven to be at any particular disadvantage.  See US Guns, German Armor Part 2 . What is less well known, however, is the idea of totally replacing the 75mm tank was well entrenched long before the Normandy landings. In a nutshell, the long term plan was always to have two types of M4 in production: 76mm and 105mm.

The story starts even before of the US’s entry into the war, in Sept of 1941, when they decided that they wanted to fit the 105mm and 3” guns to the M4. The latter was a tad heavy, so they went and developed the lighter-weight 76mm which was in testing by the following August.  So confident were they that the 76mm would work that by mid August 1942, the 76mm tank was classified as a substitute standard (i.e. can be issued in place of 75mm tanks), long before tests were completed.

These initial tests basically involved fitting a 76mm gun to a basic M4, and was deemed a stop-gap measure. The Armored Force, however, wasn’t overly impressed by the cramped and make-shift creation, and rejected it outright, saying that the “[g]un mount and the turret arrangement is unsatisfactory principally for the reason that the gun mount employed in the quick fix turret does not provlde adequate space for the installation of slghting telescopes of suitable size and power to develop the full potential capabilities of the 76mrn gun.”

There were other minor deficiencies noted in the report of April 1943, such as inadequate recoil mechanism (Fixed with stronger recoil piston rods) or an excessively weak elevation gear which made accurate laying impossible and precluded the completion of accuracy tests, or the travel lock blocking the driver’s vision. Small stuff. However, Armored Force did conclude that development of the 76mm gun for the M4 be ‘continued and expedited.’ Another recommendation was for inclusion of “the latest developments in ammunition stowage to prevent ammunition fires in tank”

Note that this is from the Armored Force Board report, not Ordnance Branch. It wasn’t just Ordnance pushing for the development of the 76mm M4, and it wasn’t Armored Force refusing to accept any need for the 76mm armed M4 until the lessons of Normandy beat it into them, contrary to popular belief. Incidentally, OCM 19984 of March 1943 also indicated that the Tank Destroyer Board was to test the M4A1 76mm, but I haven’t discovered any reports from that test or indications that the TD Board ever carried them out (Granted, I haven’t specifically looked for them either)

The response was fairly swift.  By 03MAY43, the Ordnance Committee had revoked the substitute standard of the M4A1 76mm, and officially initiated development of the M4E6 series of tanks.

Ordnance were ahead of the game, though. General Barnes had verbally approved the idea of taking the turret of the T20 tank back in March, and putting it onto the M4. The E6, however, was going to be more than just a firepower upgrade, it was more of a mid-life tank design refinement. It would incorporate wet ammunition racks, a new front contour, thicker hull armour, new hatch designs, oil cooler design, relocated generator, and a slew of other enhancements.

With the headstart provided by General Barnes (And the generally more rapid pace of R&D in WWII than we’re used to today), the first of two M4E6 pilots had been delivered to Aberdeen for testing by the end of June 1943 (Now with a T23 turret). A number of tweaks were still required, but the final design was sorted out by September 1943, and mass production followed immediately thereafter.

A document dated 17 August 1943 lays out the plan pretty bluntly.

“Discontinue mounting the 75mm gun and turret on rnedium tanks as soon as the production models thereof are so modified as to accommodate the 76 mm gun and turret, but in no event later than 15 December 1943 for the M4 and M4A1 models, and 15 January 1944 for the M1A2 and M4A3 models”

This is not an indication of a desire to keep a mix of M4(75)s and M4(76)s for a mix of anti-infantry and anti-armour work. This is indication of an understanding of obsolescence of the 75mm and a desire to eventually eliminate it in favour of the 76mm. That said, a large meeting on 20SEP43 between the Army and tank manufacturers acknowledged that the use of 75mm, 76mm and 105mm M4 tanks would be used “to provide a well-balanced team,” but that was probably just an acceptance of the fact that they had already built thousands of M4s with 75mm guns and they may as well use them.

A letter from the manufacturing section on 11 Sept 1943 states the following actions would be carried out to meet the Army Supply Forces plan:

“M4, M4A1: Mounting of 75mm gun and turret in these two tanks will be discontinued not later than 15 December 1943

M4A2: Mounting of 75mm gun and turret on Medium Tank M4A2 will be discontinued not later than 15 January 1944

M4A3: Manufacture terminates on or about 15 September [..] at Ford Motor Company, Detroit Michigan. No other facilities will produce this model tank during 1943. Manufacture by Detroit Tank Arsenal and Fisher Tank Arsenal will not start before 15 January 1944.”

Although the instruction mandated that M4(75) tanks would cease production in the new year, Ordnance said nothing about stopping production of the hulls. The backlog was expected to be in the production of guns and turrets. As a result, Ordnance estimated that there could be between 1,220 and 2,344 M4 hulls sitting around waiting for turrets between 01Feb44 and 01Mar44. 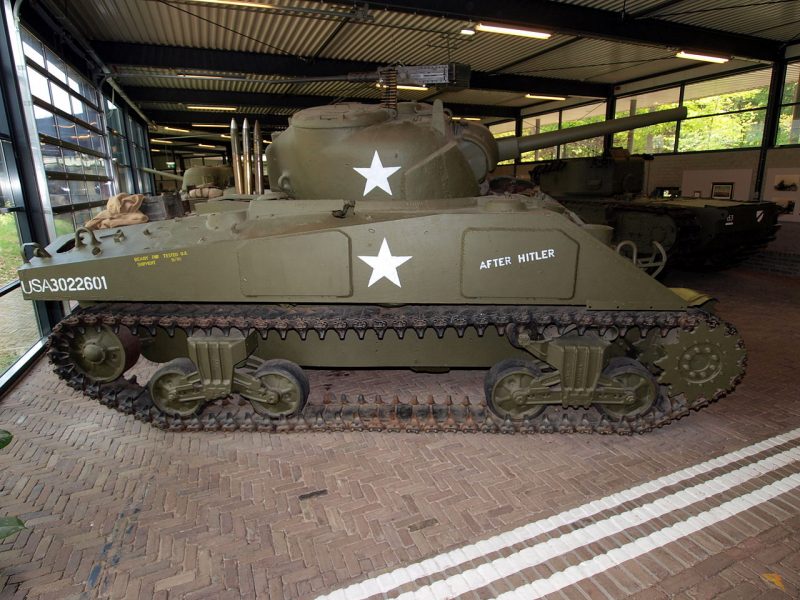 There were some minor exceptions. A contract with Baldwin through the end of the year would see some 57 tanks cross into the 76mm zone. They were excluded, as were the M4A6s and M4A4 Rebuilds being produced by Detroit. Similarly the tail end of a large contract with Federal Machine for M4A2s, if there were any left to be produced after 15JAN43.

As far as Armored Force were concerned, they were all for the 76mm tanks. A letter dated 21st August 1943 from Armored Force HQ indicated that they wanted to send a couple of early production tanks to a combat theatre to verify that they were proven reliable in combat conditions, and as soon as this was done, to immediately build the first thousand to be allocated as follows:

Armored Force’s thinking was that these 1,000 tanks “be placed on the battlefield at the earliest possible date”. Note that they’re not looking at interspersing M4(76s) with the M4(75)s right now, they’re considering fielding entire units of pure M4(76)s from the ground up.

Now, 1,000 tanks may seem like small change when they are churning out tens of thousands of tanks in the year, but it is important to note that Armored Force wasn’t so worried about the type of 76mm tank in production, as long as they actually had a 76mm tank in production. A different letter points out that the 1,000 number was simply to tide Armored Force over until someone made a decision on the T20 or T23 series of tanks. If they were to be produced, contracting production of more M4E6s at that early date would be wasteful. On the other hand, if it seemed that neither T20 nor T23 were to be fielded, signing new contracts for additional M4E6s would be a very simple process. Either way, the days of the 75mm M4 Medium were numbered. 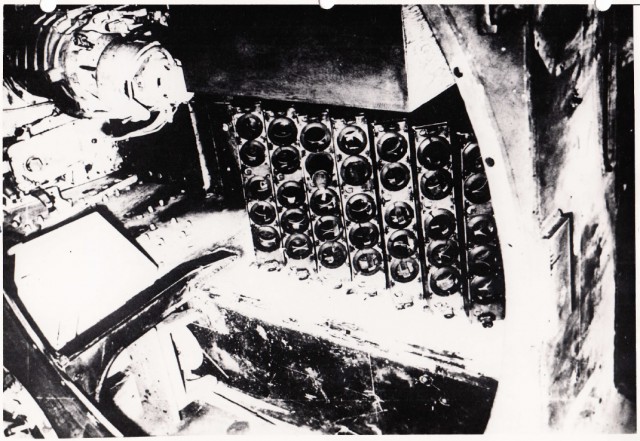 The new ammunition stowage configuration as prototyped in the M4E6

It is instructive to note the US Army’s lack of evidentiary need for the 76mm gun: The program was started before anything that the 75mm couldn’t take care of was met. Tiger had not yet been encountered. The first Panthers had shown up in Kursk only a few weeks before the order to cease 75mm production was made, I’m not sure quite when the US Army received its first reports (The first publication by the US Army to mention Panther was the Tactical and Technical Trends or 04NOV1943) and it is likely that the decision was made before the US was aware of Panther’s existence. And, of course, Armored Force wanted the gun.

This timeline and planning process basically further destroys all sorts of claptrap that keeps running around about people deciding the tanks didn’t need a 76mm gun because of some supposed doctrine that they weren’t supposed to engage tanks, or a doctrinal desire to keep the 75mm around because of its anti-infantry utility. It kills the idea that the 76mm was a response to the German cats. The 76mm was ‘the way of the future’ before the Italian campaign was launched, let alone the lessons of Normandy.

Now, why there were no M4(76s) to be found in the Normandy invasion is another matter, more related to logistical than availability issues and there were several failings to be found amongst the decision-makers there, but that is another issue entirely.

Unfortunately, the myths will persist.