Many humans worldwide fear going to the Dentist for pretty obvious reasons: The pain, the worry that you’ll have to get a cavity filled, and just the general discomfort of having someone put their hands in your mouth. But for the Japanese forces during the Battle of Saipan, one such trip to the see the Dentist would prove quite deadly.

Benjamin Lewis Salomon was a Dentist by trade and member of the US Army Medical Corps in World War 2.  Yet, when his field aid station was being overrun by thousands of Japanese, this man threw down the surgical gloves, picked up a machine gun and told 100 plus Japanese soldiers that the Dentist would see them now.

Salomon was born into a Jewish family in 1914 Wisconsin. Growing up like many typical American youths of his day, he was an eagle scout, played sports, and graduated from Shorewood High School in Wisconsin. He then went on to receive his undergraduate degree before graduating from the University of Southern California Dental School. He set up his dental practice and began living the average all-American life.

As the clouds of war began to gather, Salomon found himself drafted into the infantry in 1940.  And while he proved himself an apt infantryman in peacetime, he was notified in 1942 that the Army would be transferring him to the US Army Medical Corps to serve as a Dentist. 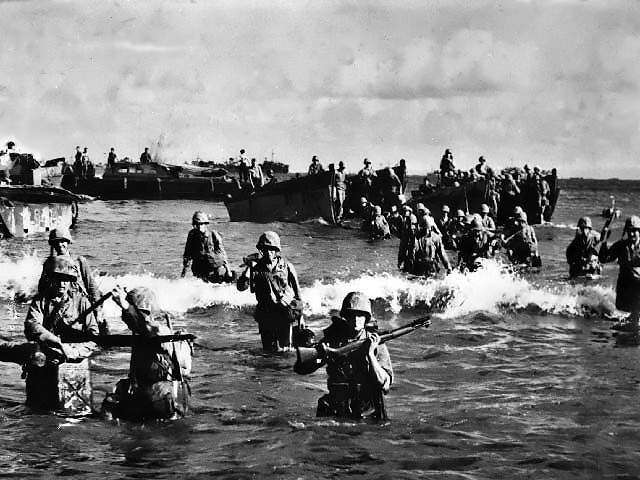 However, in 1944, the 105th would find itself off the shores of Saipan gearing up for one of the bloodiest battles of the war. With very little dental work to be done during active combat, Captain Salomon volunteered to replace the 2nd battalion surgeon who had been previously wounded.

As such, he went ashore to set up a combat aid station extremely close to the front lines. And this is where the story takes a remarkable turn that will prevent you from ever looking at your friendly local dentist in the same way.

With the Americans and Japanese in a pitched back and forth battle, this particular aid station was perhaps no more than 50 yards behind the front position on July 7th, 1944, when approximately 3,000 to 5,000 Japanese soldiers attacked the American position.

The aid station quickly began to fill with the wounded and Captain Salomon was hard at work treating them when he noticed a Japanese soldier bayonetting an injured soldier next to the aid tent. Salomon quickly picked up a rifle and killed the marauding Japanese soldier. 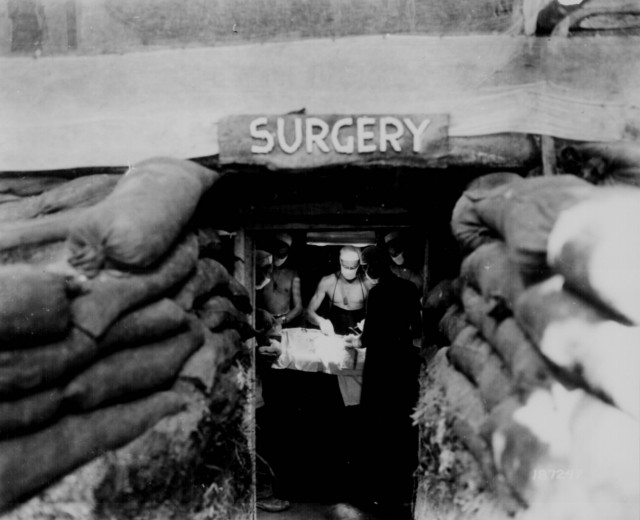 Two more Japanese soldiers entered the tent and were struck down before he noticed four more Japanese crawling under the tent walls. Captain Salomon immediately rushed them and did what can only be described as going “beast mode.”

He kicked the knife out of the one’s hand, shot another, bayonetted the third, and then butted the fourth in the stomach before subsequently shooting him. At this point, it became clear that the position was being overrun, and no more work could be done here.

He then ordered all the wounded to make haste for the regimental aid station as he sought to cover their retreat. Captain Salomon grabbed a rifle lying among the wounded and headed to work.  He eventually made his way to a machine gun position after the soldiers manning it had been killed, and this is the last anyone saw Captain Salomon alive.

When his body was found slumped over the machine gun a few days later, 98 dead Japanese soldiers were strewn out in front of his gun position.  Salomon’s body had 76 bullet wounds in it, along with multiple bayonet strikes. It appeared that Salomon had taken such a toll on the advancing Japanese that they sought revenge on his fallen body.

If you are thinking that such action clearly warranted the Medal of Honor, you would be right. But unfortunately, such an honor would have to wait until 2002. The Army at the time was worried about presenting the Medal of Honor to Captain Salomon due to his status as a medical officer and the fact that he wore the Red Cross on his sleeve.

It was against the Geneva Convention at the time for medical personnel to take up arms against the enemy. It was only in later interpretations that this rule was relaxed to allow medical personnel to take up individual arms such as rifles and pistols to protect the wounded. Further complicating Salomon’s case was the fact that a machine gun is technically a crew-served weapon. Several officers over the years had taken up Captain Salomon’s nomination and pressed it forward with no result. However, in 1998, Dr. Robert West of the USC Dental School pushed the issue with a US Congressman. Captain Benjamin Salomon was finally posthumously awarded the Medal of Honor in 2002 by President George W. Bush.