In 1944 the Allies began to plan an invasion of France, then occupied by Nazi Germany. Germany was losing on the Italian and the Russian Front, and it was decided that the time was right for an invasion from the west. At the Trident Conference in Washington, it was decided that the U.S. General Dwight Eisenhower would be Supreme Allied Commander, and the British General Bernard Montgomery would command all the land forces.

They would land at Normandy in northern France and the codename for the invasion would be Operation Overlord. United States forces would land at two beaches, named Utah and Omaha. The British would land at Sword and Gold Beaches. The Canadians would land at Juno Beach.

There were so many troops involved in Operation Overlord that two artificial ports, called Mulberry Ports, had to be built. Also, special tanks that could deal with beaches and obstacles had to be developed and built. They were nicknamed Hobart’s Funnies, named after their commander, Major General Percy Hobart.

Before the invasion, the Allies tricked the Germans into thinking they would not invade when and where they did. As a result, the resistance to the Allied invasion was not as fierce as it might have been.

On 6th June 1944, the invasion began. Nearly 160,000 troops crossed the English Channel in 5000 transport ships, supported by 1,200 aircraft. After three weeks of hard fighting, the Allies took the city and port of Cherbourg on 26 June and Caen on 21 July. The Germans counter-attacked at Mortain but failed, and 50,000 German troops were captured at the Battle of Falaise. After the first landings in Normandy, more than 3,000,000 troops arrived in France in mere weeks.

On 15 August the Allies invaded southern France in a campaign named Operation Dragoon. On 25 August Paris fell, and the weakened German forces retreated across the River Seine on August 30.

Here are some amazing pictures from the period after the landing in Normandy which took place on June 6th, 1944 and before the breakout and the race across France! 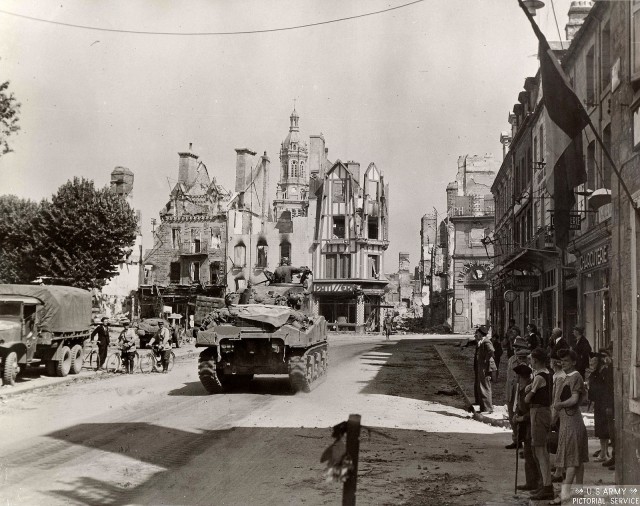