Just before The Battle of the Bulge, Allied officers drew an eighty-eight-mile line through the forests, hills, and ravines that make the region called The Ardennes. This area lies principally in modern day Belgium but also stretches into France, Germany, and Luxembourg. Being strategically situated, the area’s recorded history is punctuated with wars dating back to Charlemagne in the Middle Ages.

Earlier in the war, the German Army found ways to traverse the rugged terrain and fast moving rivers of the area that had previously been perceived at impassable. Through this difficult route, the Germans entered France in May of 1940 and marched toward victory in Paris.

After America entered the war and France had been liberated in 1944, the Allies were pushing through Belgium with sights set on Germany itself. The German forces had pulled back into the forests and disappeared into the shadows of the evergreen trees. The Allies secured the eighty-eight-mile line with battle-weary soldiers and green, fresh off the boat infantry.

After fierce fighting, which started with the landings in Normandy in June 1944 and continued all through September and October of 1944, hundreds of battered and exhausted men were sent to rest and re-equip. The front was to be defended, for the most part, by inexperienced soldiers who had to cover far more ground and face an enemy assault they could not imagine. Not even the commanding officers expected the intense attack that was to come. 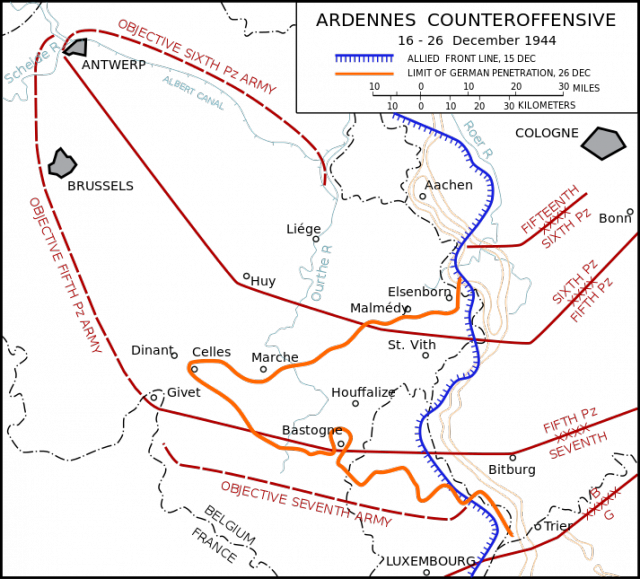 Under the cover of the dense forests of the Eifel region, which borders the Ardennes, twenty-five divisions with heavy artillery and two of the dreaded Panzer tank divisions had gathered under the evergreen trees out of sight of any aircraft reconnaissance. Twenty to thirty thousand German soldiers were ready to push the Allies aside and march to Antwerp, Belgium.

This action was designed to split the British and American Allied line in half, so the Germans could then proceed to encircle and destroy four Allied armies, forcing the Western Allies to negotiate a peace treaty in the Axis Powers’ favor. Once that was accomplished, Hitler believed Germany could fully concentrate on the eastern theater of war.

At 5:00 a.m., artillery fire heavily bombarded the northern line of the Allied front. Attacks occurred along all eighty-eight miles of the defended line. A concentrated tank effort pushed through the defenses and in just three hours had advanced three miles into Allied territory and sent the 14th Calvary group into retreat. American brass reacted quickly, reassigning reserve groups of soldiers and sending the 106th Division to provide flank protection. The very real possibility of Allied regiments becoming surrounded and isolated from the rest of the army loomed as December 16th drew to a close.

By his own admission in the book, “Bastogne – The First Eight Days” by General S. L. A. Marshall, the brass had not planned appropriately. “…was a clear case of VIII Corps misunderstanding the enemy’s intent, though the same misunderstanding prevailed in the entire Army for months afterward.” Only after capturing documents and orders did they learn Hitler’s intent was to cut the Allied forces in two, making it vulnerable to the mighty German forces. Allied leaders believed Hitler had his eye on Liege, Belgium, but seized documents lined out strict orders not to advance that far toward France. Hitler wanted to destroy the Allied ground force and came very close to doing it.

Day one of what came to be known as The Battle of the Bulge left the Allies struggling with defeat. Incensed, the generals braced and regrouped for the days of battle to come. There was no way but forward toward Germany. Reporters, looking at the diagrams of the battle lines coined the term “bulge” and thus the name of the entire battle that would last for six grueling days.

The bulge in the defense line was on the German side they pushed into Allied territory. From the Allied point of view, it was a punch in the gut almost splitting its mighty army in half and could have affected the length, or outcome of the war in Europe.