It is some time since we saw the first volume of this series and I am pleased to say this latest outing is most welcome.  The format seems to be much the same with photographs presented in a very simple style accompanied by extended captions. The book is supported by a forward by the illustrious Ken Tout whose accounts of his exploits on campaign are much admired.

The book opens with the story of how the Poles came to be in Britain, taking a look at events in Poland during Hitler’s invasion and then in France during 1940 where many Poles served in the French army.  This takes us to when the division was formed in February 1942 and aside from images of those earliest days; the book includes pages from training and technical manuals showing Poles how to wear their British kit and details of the Sherman tanks in Polish service. We see scenes of training in the United Kingdom before concentrating on events in Normandy. The story culminates with the closure of the Falaise Pocket at Chambois where we see the disaster inflicted on the Germans in typical imagery of the period.

This is a Normandy book and all the ingredients are on view, so there is a lot of stuff of use to model makers and re-enactors, alike. In fact, the book includes a sequence of colour recreations of Polish troops in Normandy and the section is completed with colour drawings of armoured vehicles of the division and colour artwork of the Maczuga, or Mace; where some of the bitterest fighting took place.

I am really impressed by the detailed captions and the simple presentation allowing the photographs to speak for themselves. There is a great deal to look at here and one of the most interesting sequences shows German prisoners of war re-mustering as replacements for Polish units. Doing this sort of thing was a useful expedient given the manpower situation facing the Poles, so finding willing hands in the form of countrymen who had been in compulsory German service makes good sense.

All the armour you would expect to see is here and the authors don’t shy away from showing a number of knocked out Allied tanks and their dead crews. While Shermans dominate there are plenty of shots of Stuarts and other types to enjoy.

Needless to say, there are a good number of snaps showing captured or knocked out German kit and we see plenty of dead Germans. This follows on perfectly from images showing Monty visiting the division back in the UK where he told the Poles they would be going with him “to kill Germans’. This appears to have gone down very well indeed and they clearly acted on his promise.

I have to say I think this volume is an improvement on its predecessor. I am not sure if I am keen on the artwork, but it all seems to fit. It tends to give the end result the feel of an extended Osprey book. The re-enactment scenes add colour and will be of help to the model makers and living historians I mentioned earlier.

Some of the photography is fantastic while the rest are just honest to goodness record shots that fit really well into the package. The text is straightforward and easy to follow.

I like no nonsense books like this one and will be interested to see just how much more Mr. Jarzembowski and Mr. Bradley can turn up in Polish archives to further the history of the division as it advanced into Belgium and the Netherlands.

Poland’s part in the victory over the Nazis in the west is bittersweet, to say the least. Books like this help remind us of the sacrifices exiled Poles made in the quest to defeat the Germans and the 1st Polish Armoured Division were there all the way.

Archive photo books really work for me and this one does not disappoint. Helion have the knack of doing them really well and this one is par for the course. I really do hope there is a volume three on the basis of this one and I recommend it. 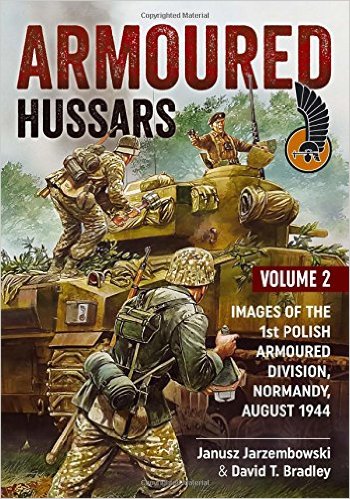