Inter-service rivalry is kind of a thing within the military and while many would compare it to a fight amongst brothers, let us not forget that brothers sometimes know how to throw a punch or two.  For Marine General Holland Smith, this was more than an opportunity to take a swipe at a brother.

The Marines being a Department of the Navy would long find themselves subject to the direction of Naval leadership.  But being a ground force like the Army, they would often find themselves in those days under the threat of being absorbed by the Army.

General Smith knew how to stick up for his Marines on the battlefield and beyond.  If a few Army Generals and an Admiral or two got a little bothered by that, then so be it.  But since he also proved to be a bayonet in the Japanese’s side throughout the war, what’s the harm in a little fight amongst brothers.

Almost in the Army

Holland Smith was born in 1882 Alabama.  He would receive a Bachelor’s degree from both Auburn and Alabama which you think might make this man more ready to bridge a vicious divide.  But when it came to his beloved Marines, he had but one loyalty.

He had actually joined the Alabama National Guard at one point and became first sergeant of a Calvary company.  However, after seeking a commission in the Army for which there were none available, the future architect of the Marine Corps greatest moments would become a Marine Second Lieutenant in 1905.

The years before World War 1 would find a young Smith fulfilling the traditional role of the Marines as he served in every clime and place from the Philippines to the Dominican Republic. It was during these years that General Smith would pick up the nickname, “Howling Mad”, for his ferocious demeanor and ability to say just exactly what was on his mind.  After squashing the rebels in the Dominican Republic in 1916, Smith was sent to Europe as the US entered World War 1 in 1917.

By then a Major, Smith would command the 8th machine gun company, 5th Marines in France.  He was temporarily detached to attend the Army General Staff College at Langres.  When he graduated in February of 1918, he would be one of only 6 Marines ever to complete this course.

After that, he served as the brigade adjutant for the 4th Marine Brigade.  Here he would see combat in the famed battle of Belleau Wood.  And while the Marines would earn their ferocious title, Devil Dog, in this battle, it doesn’t appear that Major Smith was in the mix of the heavy fighting.  He left the war a Major and primed for his future role as the Army and Navy’s thorn in their side.

Ready for the Big War

During the post-war years, Smith would serve in various capacities to include time at the Navy War College in Newport, Rhode Island.  It was here that Howling Mad Smith would mix it up with traditional Naval officers as he advocated the Marines were the ideal force to conduct an opposed amphibious landing.

At that time, many in the Navy hierarchy viewed the Marines as a secondary branch.  As such, they believed such landings should be led by the Navy with the Army conducting the landings. 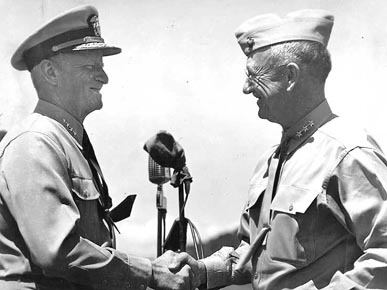 But Smith had other plans as he in almost prophetic fashion championed for the development of a strategy to conduct massive amphibious invasions.  Smith’s ideas eventually won out and during the years in the run-up to World War 2, Smith would develop, hone, and train others in this newfound strategy.

By the time World War 2 rolled around, Smith was now a Major General and would remain in this training and strategy roll until 1943 when he was called to the Pacific by Admiral Chester Nimitz.  General Smith had long wanted a combat command and was given command of the V Amphibious Corp.

Here, General Smith would continue to clash with his commanding officer, Admiral Kelly Turner, as the Admiral insisted on maintaining control after the Marines hit the ground.  Smith grizzled, but maintained his professionalism.

After successful campaigns in the Gilbert and Marshall Islands, General Smith was able to take on a larger role in the invasion of the Marianas.  During the battle for Saipan, Smith commanded two Marine divisions and one Army division.  The fighting had become so fierce on Saipan, that he called up his reserve unit, the 27th Army Division, on the second day.

As the three Divisions attempted to move forward, General Smith became frustrated that the Army division couldn’t keep up during the attack. Howling mad over the lack of progress, he removed the Army General from his command that made the Army brass absolutely lose their minds.

True to the End

While relieving an officer of their command was not an unheard of practice during the war, for a Marine officer to remove an Army officer was unprecedented.  The Army conducted an investigation after the battle, and while they acknowledge General Smith had the right to remove the subordinate commander, they felt it was unwarranted. General Holland Smith was then given a “promotion” to command the newly formed Fleet Marine Force, which was conveniently located back in Hawaii.

While many would see this promotion as an Army and Navy attempt to silence the man, his strategies had been proven true in the fire of combat, and there was no better mind on amphibious warfare in the entire US military. As such, General Smith was called back to the front to advise on the invasion of Iwo Jima.

After the War, General Holland “Howling Mad” Smith would retire a full general where he would go on to keep his criticisms of the Army and Navy alive, well, and more vocal than ever.

The story of General Smith against the backdrop of an Army, who had visions of absorbing the Corps and a Navy, who thought them a lesser branch give greater meaning to one of the most famous quotes of the war.  It was said at the Battle of Iwo Jim that as the Marines raised the flag on Mount Suribachi, Secretary of the Navy James Forrestal stated, “the raising of the flag on Suribachi means a Marine Corps for the next 500 years.”

And these words were spoken to none other than one General Holland “Howling Mad” Smith.