As dawn rose on 1 September 1939, a German army swept across the border into Poland. Already tense, European politics would now descend into the devastating bloodshed of World War Two. Poor Poland, the flashpoint for the war, was completely over-run in just over a month. It was only by fleeing to other countries that her armed forces would play a significant part in the war.

So why did Poland fall so quickly?

Under Adolph Hitler, the Germans had spent the preceding years preparing for war. Starting from a humiliating peace after the First World War, Hitler had assembled armed forces that were highly trained, aggressive and equipped with the most up-to-date weapons. He had carefully pushed the boundaries of what Germany could do in Europe, gaining strategic advantage from other nations’ reticence to take up arms and once again see millions die.

Being the aggressor against Poland only added to this edge. The German military had been preparing for the invasion for months. They were ready, able, and chomping at the bit.

Poland had powerful allies. A military treaty signed in 1921 ensured French support in the event of invasion. Emerging from a policy of appeasement, Britain had pledged in March 1939 that it would defend Polish independence if called upon.

But France and Britain were on the far side of Europe, and had no troops in place to help the Poles. Though they declared war on Germany on 3 September, they could not yet offer practical support. A French invasion of German Saarland on 7 September was meant in part to distract the Germans, drawing their attention from Poland. A complete disaster, it ended on 13 September.

Britain didn’t even have any troops on the continental mainland until 3 October, two days before the last major Polish Army units fell.

Despite Germany’s aggressive moves toward its neighbours, including absorbing Austria and swallowing half of Czechoslovakia, the Poles were not ready for war. They only began to mobilise on 31 August, the day before the invasion.

When the Germans attacked, 17 infantry divisions were ready to face them, along with three brigades of infantry and six of cavalry. 22 divisions were still gathering and preparing for war. More than half the armed forces were not in place.

Polish equipment was the opposite of the sleek new weaponry employed by the invaders. Many weapons dated back to the 1920s. Against fast-moving and heavily armoured tank divisions, the Poles fielded cavalry armed with lances, despite the failings of cavalry against the weapons of the First World War – weapons which were themselves now obsolete.

Aerial combat technology, which had only come into existence in the First World War, had been developing at any incredible rate as it went through its infancy. The Polish Air Force had 842 planes – a fifth of what the Germans fielded – and those planes, like many of the guns, were obsolete.

The Germans employed a new and shocking tactic – Blitzkrieg, or lightning war. Led by top of the line tanks, they advanced across Poland with relentless speed.

This left the Poles constantly on the back foot. There was no time to fall back and regroup. Attempts to slow the Germans down while troops gathered came to nothing. Progressing 140 miles in seven days, a corps of German armour reached Warsaw, the capital of Poland, on 8 September.

This left Polish formations, as well as lines of supply and communication, in tatters. By 10 September, the army was shattered, isolated pockets of troops struggling alone against the invaders.

Later campaigns would show that Blitzkrieg was not the magic bullet it at first appeared. Part of the reason it proved so successful was the Polish landscape.

Poland had been the victim of many invasions over the years. Armies had seized it for themselves or swept through it on the way to take on other powers. This partly came from being surrounded by belligerent neighbours. But it was also in part due to its relatively flat geography. A lack of major geographical obstacles made it easy for an army to advance across the country, and hard for Polish troops to find natural defensive positions. Nature had provided the perfect terrain for Blitzkrieg.

The Luftwaffe, Germany’s airforce, is rightly remembered for the important role it played in the Second World War. This began with the assault on Poland.

Unlike the Polish airforce, the Luftwaffe was supplied with 4,700 modern combat planes. Flying above and ahead of the German advance, they smashing any defensive formations the Poles threw together. When not attacking troops they bombed power stations, railways, roads and bridges, demolishing the infrastructure the Poles needed to assemble an army and bring it to war.

The feeble Polish airforce could do little to stop them. This was no reflection on their pilots, some of whom would go on to fight with courage in the Battle of Britain. 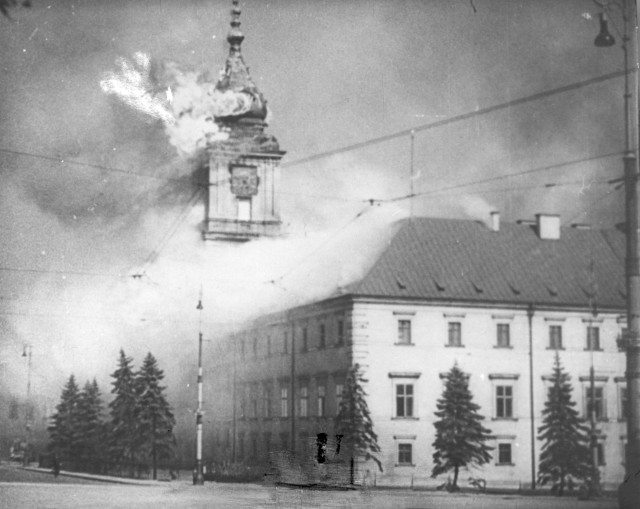 The Germans hit civilian targets as well as military ones, destroying resistance with a campaign of terror. Cities were bombed by the Luftwaffe. Artillery turned swathes of Warsaw into smoking rubble. The capital’s supplies of water and flour were destroyed, starving out its ordinary citizens as well as its defenders.

Everybody’s will to fight would be crushed.

The nail in the coffin came on 17 September when the USSR invaded Poland from the east.

Hitler and Stalin held opposing ideological positions, Hitler hating Communism so much that it would lead him into a misguided invasion of Russia. But in September 1939 the two countries were feeling more pragmatic, having signed a non-aggression pact that included a secret clause to divide Poland between them.

Attacked from both sides by two of the greatest military giants on Earth, the Poles surrendered. Many soldiers were murdered or died in captivity. Others fled, and would go on to fight for their country’s liberation.