The Brusilov offensive was Russia’s greatest military triumph of World War One, but also the scene of one of that nation’s most misguided and disastrous assaults.

The brainchild of General Aleksei Brusilov, the June Advance was the major Russian offensive campaign of 1916. Launched on 4 June, it was one of several offensives that Russia, Britain, France and Italy had agreed to launch that summer. The aim was to put pressure on the Central Powers through simultaneous and coordinated attacks on every front.

Brusilov’s plan was for a massive offensive against the forces of the Austro-Hungarian Empire in Galicia. He hoped that such an assault might allow them to knock Austro-Hungary out of the war.

Using stealth and trench works, Brusilov brought his four armies within a hundred meters of the Austrian lines along a front 300 miles long. Instead of the heavy bombardments that normally preceded attacks in the Great War, he launched a short but accurate bombardment which did not give his enemies time to predict his plan and prepare to defend. Attacks by shock troops then puncture the enemy lines, and three of the four armies broke through.

Brusilov’s offensive was hugely costly in lives, but effective in breaking the back of the Austro-Hungarian army and drawing German troops away from Verdun. It proved the power of shock troops and using focused force instead of flinging in endless shells and soldiers to wear the enemy down.

But amidst this mastery of modern warfare, and far more foolish endeavor unfolded. 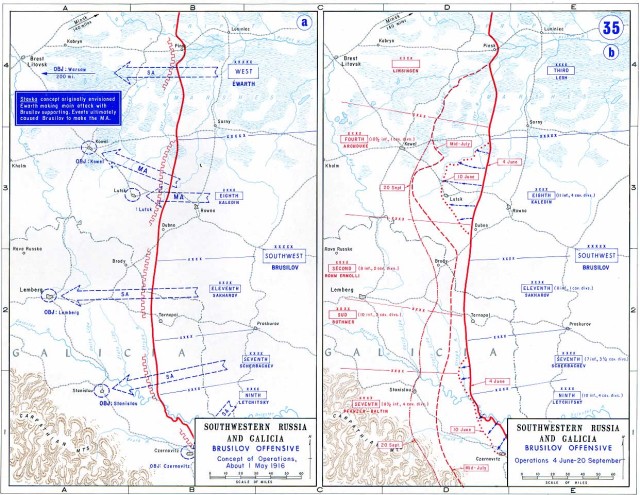 An Act of Indulgence

Among the objectives of the June Advance was the recapture of Kovel, a city lost to the enemy the previous year. Responsibility for this part of the plan fell upon the Guards Army under General Alexander Bezobrazov, a supposedly elite force that had undergone special training.

However, as Brusilov well knew, this was not the sort of elite he needed for his plan. Its officers had been nominated by the Tsar and were chosen for their social graces rather than their military skills. This was essentially a club for the Russian aristocracy, not a professional officer corps. Its leaders included Grand Duke Paul, a close friend of the Tsar.

This was a high profile battle, and the honor of leading it had been given to men of standing, not skill.

The attack did not start like Brusilov’s grand assaults, with a short sharp barrage to shock and weaken the enemy. There was no preparation and no artillery fire accompanying the first wave of soldiers.

In  Kovel, the Germans had prepared the ground for defense. They had laid barbed wire, which the guardsmen had to cut their way through, and set up deadly machinegun nests. It helped the Germans that the Russians were attacking on a front eminently suitable for defense. They had to advance along three causeways across a swamp, and the defenders had set up their guns to ensure heavy fire upon these choke points.

Despite these circumstances, the brave soldiers of the Guards Army made some advances in this frontal assault. These came at the cost of 30,000 men.

With the frontal assault suffering heavy casualties for little gain, Grand Duke Paul was ordered to take his First Corps in a flank attack. It was now that the character of the Guards Army officers really came to the fore, as the Grand Duke refused the order. He wanted the sort of glorious warfare he had doubtless read about in patriotic histories, strong formations advancing courageously upon the enemy, colors flying in the wind. There would be none of this creeping around the sides for him and the Guards – he considered it far below the dignity of an elite Russian force and its traditions.

Marching in the sort of splendor of which aristocrats dream, the Preobrazhensky Guards, and the Imperial Rifle Regiment – two of Russia’s greatest units – marched down the causeways towards the enemy. The results were as horrifying as they were predictable to anyone paying attention to battles of the First World War. Thousands of men were mown down as they advanced straight towards the German guns. More were caught in the fire of German planes, which dropped bombs and strafed them with machine guns.

Some men jumped into the swamp, hoping to avoid being shot. Wading through the slime, weeds, and mud slowed them down, making it easy for the Germans to pick them off, not in a mass as on the causeways, but one by one as they struggled to walk through filth. Many drowned.

Adding to their woes, the Russian artillery now followed its orders and opened fire. As the Grand Duke was expected to be on the flank, they opened up on the center as ordered, hitting their own badly placed comrades.

Despite all this horror, the Guards lived up to their reputation for courage and took the German trenches. But the cost had been dreadful – 70% casualties, 55,000 men lost. Some of these died in a horrible accident while being treated for their wounds, as a fuse dump exploded next to the field hospital.

The plan was for the cavalry to move in after the infantry, consolidating the Russian position in Kovel and ensuring that the city was held. Seeing the terrible circumstances of the advance, the cavalry refused. Having lost so much to take the German trenches, the Guards were now forced to abandon them from lack of support, retreating in a hail of German fire.

There was anger in Russia at the horrors of Kovel. General Bezobrazov and Grand Duke Paul lost their positions of command. The whole business was made more bitter for occurring during one of Russia’s greatest military successes. The arrogance of the Grand Duke possibly denied Russia its greatest victory in WW I, one that could have changed the course of the war on the Eastern Front.