Much of America grew up on tales of Lassie and his ability to let humans know when a small child has fallen down a mine shaft.  Well, that is all fine and dandy, but tell me when Lassie notifies allied troops of an imminent gas attack from the German Empire.  Tell me when Lassie locates a wounded soldier in the midst of no man’s land and stays with him until the Allies retrieve him.  Lassie, Disney, and every other brand sporting a smart dog movie should hang their heads in shame and just salute the heroism and bravery of Stubby the war dog.

Heroes are often born in the most inconspicuous of circumstances.  For Stubby, he happened to wander on to a Yale field where young Private J. Robert Conroy was training for World War I.  Adopted and soon to become the mascot of the 102nd Infantry, 26th Yankee Division, Stubby would go on to learn the bugle calls, drills, and even the reported ability to salute when other men did so.  Trust me when I say there are human privates who could have wished to learn so much.

Smuggled aboard the transport ship to France by Conroy, Stubby was allowed to stay after he saluted a commanding officer and would enter the heat of the fighting that was trench warfare in World War I.  This short-tailed and aptly named Stubby, was about to endure a human experience for which we would write about for a century and the likes of which modern humans could only imagine.  This dog experienced warfare and performed duties that would rival that of our most recent combat veterans.  But how this pup came to combat is far less fascinating than what the little canine actually accomplished in the midst of it.

Stubby’s first combat injury came as a result of a gas attack.  You read that correctly, Stubby the dog survived a chemical warfare attack in combat.  After being nursed back to health at a field hospital, Stubby became extremely sensitive to the smell of gas and awoke his fellow troops in the wee hours of the morning through barking and biting when a surprise gas attack took place.

Stubby served as the ultimate sentinel for gas attack and subsequently saved countless lives. But if that were not enough, Stubby was also known to locate wounded men between the trenches and bark until medical personnel were able to retrieve the fallen soldier. 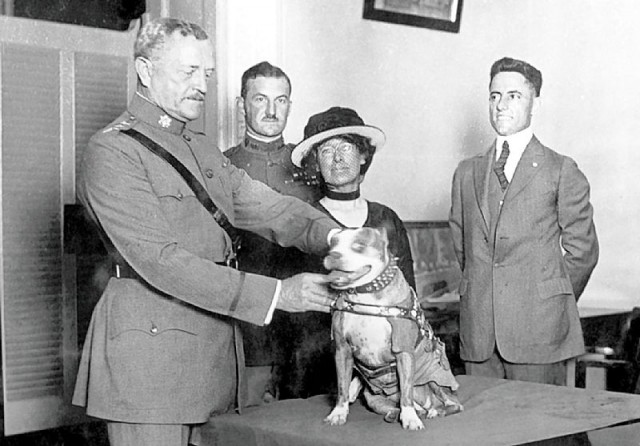 Pop quiz, when was the last time you stood up between the trenches of entrenched machine guns and barked to locate a wounded brother in arms?  But Stubby was hardly limited to being a defensive weapon.  In 1918, Stubby literally captured a German spy mapping out the positions of the allied trenches.  I’ll say that again, this puppy caught a German spy and bit him until he was apprehended.

For his actions against the German spy, Stubby was recommended for the rank of Sergeant and became the first dog to receive rank in the United States Armed Forces.  Stubby was later wounded in a grenade attack, but survived.  Having served in 17 World War I battles, stubby went on to increase the morale of wounded of soldiers before honoring war dogs everywhere stateside. He went on to lead a pass and review parade of soldiers and meet 3, count them, 3 United States Presidents. He was more decorated than many US soldiers and received a medal from the human society presented by none other than General Pershing himself.  In 1926, Stubby the canine would pass away as the most highly decorated and honored dog in United States History. This is not a fiction, but a documented historical fact.  So you may go on wishing you had your own Lassie or Air Bud as a pet, but as for me and my household, I will always long for my own Stubby the War Dog.