Ten interesting facts about the Armistice, which ended WWI.

The German Empire was in a desperate position, and many people knew that The Great War was not winnable. Some Imperial Army commanders still had schemes for victory, and the Imperial Navy wanted to engage the British Royal Navy in a decisive battle, but on November 3, 1918, the sailors of Germany’s High Seas Fleet revolted in the Kiel Mutiny.

The revolt spread throughout Germany, and within a few days Kaiser Wilhelm II had abdicated, and the transition to the Weimar Republic began. On November 10, Chief of the General Staff Paul von Hindenburg instructed the German delegation who were negotiating the terms of the Armistice to sign the conditions quickly, due to growing riots and unrest at home.

2 – While many leaders were happy to end the fighting with an Armistice, some wanted more

Although the Armistice ending WWI was essentially a German surrender, it was not quite a true peace. It was not indeed a full defeat, a complete victory.

General John J. Pershing, commander of the American Expeditionary Force, for example, even after it was obvious the military might of the Allies was heavily beating Germany’s forces, wanted to crush the Germans. He believed that only their total defeat would keep the nations of Europe from fighting again before long.

The French turned the car into a monument. When Hitler returned to France with Nazi Germany’s invasion a little over two decades later, he forced the French to sign the surrender of their country in the same car. He then ordered it blown up to avoid a similar symbolic gesture returned in kind to Germany.

4 – Although the Armistice was signed just after 5:00 AM, fighting went on for several more hours

The eleventh hour of the eleventh day of the eleventh month was agreed as the time hostilities between Germany, and the Western Allies would end. Fighting continued up until the last minute. Future American president Harry S. Truman, an artillery captain, kept his battery firing until the final moments.

5 – Much of the Armistice was built on American President Woodrow Wilson’s “14 Points.”

In a speech on January 8, 1918, Wilson outlined his principles for peace and the end to the war between the major nations of the Western world in 14 points. They included Germany evacuating troops from occupied areas, the dismantling of the Austro-Hungarian and Ottoman Empires into separate nations, to be free and autonomous, and the understanding of self-determination for many countries.

Self-determination worked out well for many countries, but places like south-eastern Europe struggled for decades as various peoples sought to govern themselves. Likewise, the Middle East also struggled to work with and maintain the borders set up by European leaders in secret agreements after the war.

6 – The Armistice, understandably, was very unfavorable to Germany

Among the Armistice’s 35 terms were the cessation of all hostilities by 11:00 AM that same day, the immediate removal of all German troops from territories outside Germany’s borders as at August 1, 1914, and the return of all POWs held by Germany.

Upon signing, Germany was also required to disarm its High Seas Fleet and surrender all their submarines to Allied powers. However, the Allied naval blockade of Germany was to stay in place while the Armistice was in effect.

Furthermore, the terms stated that Allied armies were to occupy 30 km bridgeheads in several places along the Rhine river for which Germany had to pay. The general outline for war reparations from Germany to be paid to Allied nations for damage and the cost of the war, was also included.

That November morning, flags were unfurled, and bells rang out across Paris. Hundreds of students gathered at the Ministry of War and Prime Minister Georges Clemenceau came out to proclaim “Vive la France!” and the whole crowd cried the same.

8 – When the ceasefire took effect at 11:00 AM, celebration on the front looked quite different

There were some cheers and happiness among the troops and some men even crossed the lines to celebrate with their former enemy. For the most part, however, the troops were somber, quiet and exhausted after a long war. According to Jörn Leonhard, one British corporal recalled “…the Germans came from their trenches, bowed to us and then went away. That was it. There was nothing with which we could celebrate, except cookies”. 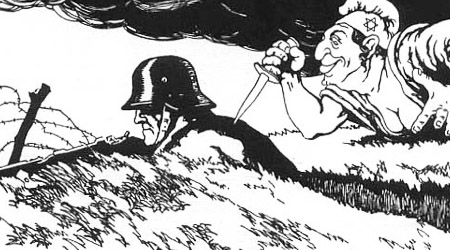 This myth, exploited by the Nazi’s in their rise to power, began when German troops started returning home. Many, mainly right-wing nationalists, believed that the forces of Germany had not been defeated, but undermined and betrayed by the new civilian government of the Weimar Republic trying to seize full power.

However, the facts are otherwise. The Imperial Army and Navy no longer supported the Kaiser, the Navy was in full mutiny, and the people of Germany were rioting and starving with various Socialist and Bolshevik groups trying to stage a revolution.