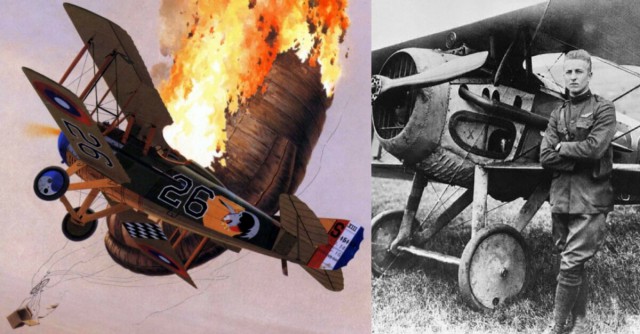 In only nine days of flying in World War I combat, just ten missions and thirty hours of time in a Spad XIII aircraft, Lieutenant Frank Luke, Jr. gained the moniker “The Arizona Balloon Buster.” Seen often on the battlefields and in defense position were gas filled balloons tethered to the ground with lines. These air ships were raised into the air with a brave soldier with spyglasses to peer into the distance to ascertain what was happening on in the enemy camp.

If the balloon itself was attacked, the observer either fell to his death or deployed a parachute to attempt to reach the ground safely. In August of 1918, Luke found he had a talent for shooting these balloons out of the sky. In the short time he was a pilot in France, he ranked 2nd overall in confirmed kills during the entire war. However, he wasn’t the expected by the book type pilot. Luke liked to play his own game.

As a youth, he played football and worked in the copper mines outside the then small town of Phoenix, AZ. He hunted, stole chickens and melons, and pulled other typical country boy pranks. Tough guy that he was, Luke also had finesse. This skill served him well in Europe and got him out of many scrapes with top brass.

After several weeks of practicing flying the Spad XIII, a single seat biplane with two synchronized Vickers machine guns, Luke reported to have shot down a German plane. No confirmation was available, but his report on August 16 was detailed:

…Opened fire at about 100 feet, keeping both guns on him until within a few feet, them Zoomed away. When I next saw him he was on his back, but looked as though he was going to come out of it, so I dove again, holding both guns on him. Instead of coming out of it he sideslipped off the opposite side, much like a falling leaf, and went down on his back.

Squadron personnel scoffed at his claim, teaching him a valuable lesson: always have someone nearby to confirm your actions. Luke learned about the observation balloons and how well they were defended by anti-aircraft fire, called Archie, a term coined by the British pilots, and was sent toward his destiny. On his next flight, he went in pursuit of three German biplanes, but they disappeared. What he did see was one of the observation balloons. Braving the Archie, he dove, and shot the balloon while the ground crew struggled to winch it down. It burst into flame and dropped onto the rigging which supported it.

To be certain someone saw what he had done, he landed in a nearby field and obtained confirmation from a witness. Frank Luke had busted his first balloon on September 12. After two more balloon strikes in the next few days, his bravado made the other pilots uneasy. On the afternoon of the 27th, an unfriendly C. O. and the other pilots conspired to give Luke a most hazardous assignment. If he busted the well defended balloon, he could stay. If he failed, he had to ship out. The plan was for Luke to roll out of formation to shoot at the enemy and only Joe Wehner would be his cover. This report was filed by Luke:

I and Lieutenant Wehner were to leave with formation to attach enemy balloon by order of C.O. On arriving at Buzy, left formation and brought down enemy balloon in flames. While fixing my guns so I could attack another balloon near by, eight enemy Fokkers dropped down on me. Pulled away from them. They scored several good shots on my plane.

I saw Lieutenant Wehner dive through enemy formation and attack two enemy planes on my tail; but, as my guns were jammed, did not turn, as I was not sure it was an Allied plane until he joined me later. You will find attached confirmation of balloon.

Lieutenant Wehner saved Luke’s life that day and they became fast friends. Together they would wreak havoc on German lines, taking out balloons, Archie placements, and enemy aircraft. They were quite a team shooting up the Germans, even scheduling a balloon busting for a visiting General on September 16. Luke and Wehner planned to attack two balloons north of Verdun at a predetermined hour. At the appropriate time, three Colonels and Inspector General Donaldson arrived in a Mercedes automobile to watch the show.

The big brass was skeptical. But right on time, flames filled the sky near Spincourt. Shortly after, a second explosion marked the destruction of another balloon. The fly boys were successful! Their reports included statements of the kills and even shooting at supply trains on the way back to the airfield. The pair of aces had shot up three balloons that night in front of some big brass and enduring heavy Archie.

Frank Luke experienced both highs and lows on September 18. He successfully attacked two balloons and three enemy aircraft. But Joe Wehner, his friend and partner, was shot down and lost. Luke was ahead of the American ace Eddie Richenbacker by five kills. The Arizona Balloon Buster had thirteen victories in one week. But Joe was gone. The 27th put on a big dinner for the new “Ace of Aces.” But Luke was miserable. He was sent to Paris for R & R but it didn’t help his demeanor. Instead, he came back with a new plan for attacking balloons. He would go it alone.

The brass would not agree with the plan. But after losing another flying partner, Luke went rogue. He acted without orders. He made his own plans. He flew a Spad to a French unit and stayed with them overnight. Orders to arrest him were issued. Instead, the rebel pilot took off in his plane alone, circled over an American observation balloon company and dropped a note. “Watch three Hun Balloons on the Meuse. Luke.”

Frank Luke flew his final sortie and blasted three German balloons out of the sky. He shot down two enemy fighters before having to ground his own plane. Legend is he rose out of the wreckage of that Spad with an automatic pistol in hand and shot as many Germans as he could before dying there on French soil. His body was robbed of all his belongings and he was buried in an unmarked grave.

Three months later, air headquarters confirmed the death of Frank Luke. A Distinguished Service Cross had been issued. Later he was awarded the Congressional Medal of Honor. Luke Air Force Base was named for him. There is a street near Addison Airport in Dallas, County Texas bearing the name of Frank Luke. It borders a museum dedicated to preserving war aviation history. This young man died at age 21. Leaving this Earth so early may have added to his legend. One thing is certain, dying as he did certainly adds to the triumphs and tragedies of Lieutenant Frank Luke, Jr., the Arizona Balloon Buster.