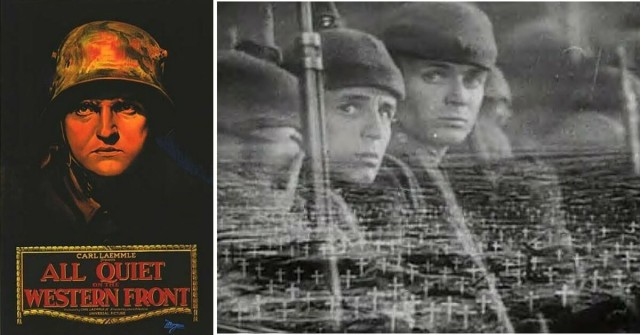 Here are 8 great war movies in honor of the Centenary of the First World War.

The first in our list of 10 great WWI movies started filming the year the Great War ended and came out just a year after. This French silent film blended romance and drama along with the horrors of the First World War. Some of its scenes were even filmed on the former battlefields of the Great War.

Described by some as an anti-war film, J’accuse (I Accuse) powerfully depicted the sufferings of war. It was a hit internationally, when it came out. Its writer-director, Abel Gance, was hailed as one of Europe’s most eminent directors.

Second in our list of 10 great WWI movies is this American silent film about the Great War. Interestingly, its director, William A. Wellman, was an experienced WWI pilot. There is even a story that Paramount Pictures had hired him at the time of the filming since he was the only established director to have had experience of war and flying.

Well, Director Wellman did deliver as Wings turned out to have very elaborate and realistic flight and air combat sequences.

Wings went on to win the very first Oscars for Best Picture. Furthermore, it stirred controversy as it was the very first to feature nudity and a scene with two kissing men.

The third film in our 10 great WWI movies list is an American film based on the novel written by German author Erich Maria Marque who served in the German Army during the Great War.

Like J’accuse, All Quiet on the Western Front is an anti-war film. It is even hailed as the first major one among sound films. Told from a soldier’s perspective, the movie showed how men were prepped up to the accolades of war only to find disillusionment at the battlefronts. War films of  more recent times like Saving Private Ryan also use the soldiers  perspective to tell the story.

The fourth picture in our 10 great WWI movies lineup was another film adaptation of a novel. Interestingly, the novel written by Humphrey Cobb never had a title when it was finished. So, the publisher held a contest for it with the winner coming from the ninth stanza of the well-known poem Elegy Written in the Country Churchyard by poet Thomas Gray.

Paths of Glory the novel enjoyed little success. An adaptation, for the stage directed by WWI veteran Sidney Howard, flopped due to its harsh and violent scenes. The movie had moderate success when it came out though it was critically acclaimed. Moreover, Paths of Glory was controversial after the French got offended about how the French Army was portrayed in the film.

The fifth in our list of 10 great WWI movies is considered as one of the most influential and greatest pictures in cinematic history. It dealt mainly with the struggles of its main character, Lawrence, and his many experiences while in the Arabian Peninsula during the Great War, including his inner struggles about his personal belief about the war, as well as his own identity.

In real life, Lawrence of Arabia was really T.E. (Thomas Edward) Lawrence. Mr. Lawrence was a WWI British officer and the movie was based upon his life working in the Middle Eastern desert for the British Army during the war.

Starring a much younger Mel Gibson and Mark Lee, the sixth entry in our great WWI movies list focused on two Australian soldiers who took part in WWI’s Gallipoli Campaign and their loss of innocence during the  war. Australian ideals and themes like ‘larrikinism’ and ‘mateship’ were also recurring throughout the movie.

Director Peter Weir had to bend a few but significant historical truths for dramatic purposes in his movie Gallipoli. Nevertheless, the film was well-received in part of its portrayal of human suffering during war.

This seventh entry in our great WWI movies lineup is an American war drama set before, during and even after WWI. The movie, another book adaptation (from a novella written by Jim Harrison in 1979), retells the lives of a father and his three sons as they lived in a remote Montana ranch, how they got involved in the Great War and how they were impacted by it

Legends of the Fall was nominated for three Oscars the year it came out and won one, Best in Cinematography.

The eight entry in our list of great WWI movies is the French film A Very Long Engagement. It delves deep into the idea of “every WWI soldier leaving a half-empty bed at home”.

This movie, also an adaptation from a novel of the same title, deals with a young woman’s faithful yet desperate search for her fiance who was most likely killed in WWI’s Battle of the Somme. It fuses romance and war resulting in a poignantly moving story of the many whose hearts were broken because of WWI.