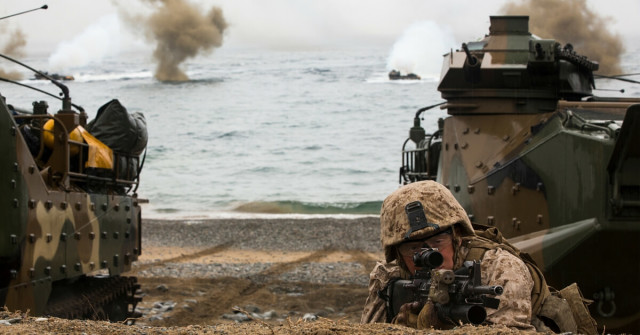 In 1953, the Korean War came to an end. However, tensions have remained high in the region. The North has never signed a Peace treaty with America and South Korea. This means that they are still technically at war.

The North Korean Communist government is the last Stalinist dictatorship and represses its people. They are still a major threat to stability and peace in the region. The regime has acquired weapons of mass destruction and even has some form of nuclear bomb. They make regular threats to the South and have threatened their neighbors, in particular Japan.

The US Marines are playing a part in the defense of South Korea.

The U.S. Marines issued a video from their recent joint amphibious exercises with South Korea.Here they displayed their latest hardware and weaponry.

The U.S. and South Korean forces were joined by members of the New Zealand and Australian armies for the drills, which were the largest ever with the two nations. They took place at the southeastern Korean port of Phoang and included 12,200 U.S. and 5,000 South Korean troops.It was an impressive display of force.

The simulated invasion was filmed from several angles, including from landing craft, from a drone and from the beach. Banks of smoke rolled onto the shore, providing images reminiscent of the Normandy invasion.

This was not only a drill or for training purposes. The exercises were a message to the Communists in the North. they better not attack their neighbor to the south, or else they will face the combined wrath of the US Marines and their allies.

These exercises could deter the North Koreans from going to war with their neighbors.