The trend to design bigger and more powerful tanks is universal, but the results are not always impressive. The requirement for a 45-ton tank was issued by Germany in May 1941 and was taken up by both Dr Porsche and Henschel & Co.

Trials of prototypes in 1942 revealed that the Henschel design was the more practical and production began in July 1942. By this time specifications had changed the tank would weigh in the region of 57 tonnes, and mount an 88mm KwK 36 gun behind a maximum 110mm of armour on the turret front.

It was a formidable combination. The gun was very effective and extremely accurate while the armour was proof against most contemporary anti-tank guns at anything but the closest range. Yet it was not all progress.

The Tiger was so wide it had to be narrowed down to travel by rail. In bad weather conditions, the overlapping wheels trapped mud and ice sufficient to bring the big tank to a halt. The engine had a nasty habit of catching fire while the gearbox if subjected to great stress, was liable to break down. If this happened, the repair crew had to lift the turret off to get at it. 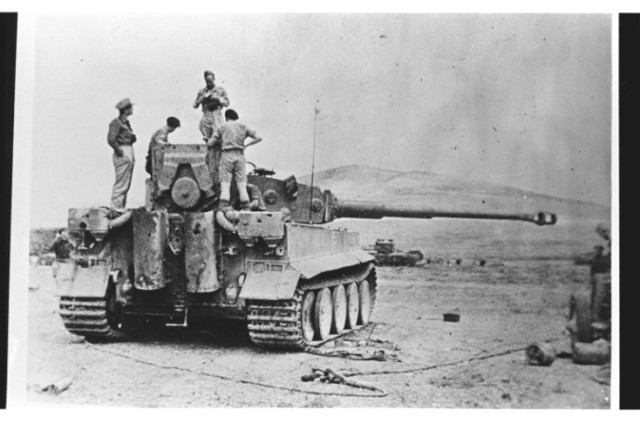 For all that the Tiger was regarded as formidable. It saw action in Russia, Tunisia, Sicily, Italy and North-West Europe (although production was limited to just 1,354 tanks) and it was feared by all Allied tank crews, which gave the Panzer forces a considerable psychological advantage. Even so, it would probably be fair to say that more Tigers were lost through mechanical failure than combat action.

This tank was the first Tiger to be captured intact by British or U.S. forces when it was knocked out in the final month of the Tunisian campaign. It arrived in Tunisia sometime between 22nd March and 16th April 1943 and was involved in an action with 48 RTR near Medjez-el-Bab on 21 April 1943.

It knocked out two Churchills but a shot from another’s six pounder stuck the gun mantlet, and although unable to penetrate the tank’s thick armour, it jammed the turret and wounded the commander. Damage is still visible on the mantlet, superstructure front plate and turret lifting boss. The crew abandoned the tank, and it was recovered the next day and refurbished using parts from other vehicles.

The Tiger was later displayed in Tunis and inspected there by King George VI and Winston Churchill. In October 1943 it was sent to the School of Tank Technology for evaluation and in November 1944 displayed on Horse Guards Parade.

David Willey, The Tank Museum Curator and co-author of the Tiger Tank Owner’s Workshop Manual, presents this Tank Chat on the subject of the most famous tank in the Bovington collection- and perhaps the world – the German Tiger Tank from World War Two.