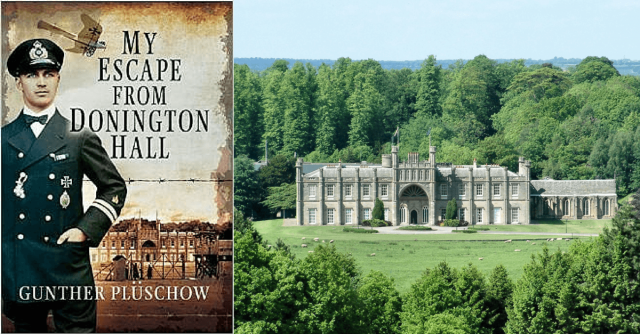 ‘Boys own stuff. ‘A tag often applied as a sort of apology for a book that may be lacking in historical accuracy yet tells one damn good story.  And that’s exactly what this book is. A ripping yarn written by the hero himself, one Gunther Pluschow; the book goes beyond telling a yarn; however. This is isn’t a tale or a fantasy. What Pluschow tells us is fact. Astonishing and yet true.

Dozens of German POWs were brought to British shores during both WW1 and WW2. Soldiers, sailors and airmen were shipped over in their thousands and settled in huge camps the length of the country. For many, life was hard and tedious. Rationed food, boredom behind the wire and of course a longing for home were constant; but for many life as a prisoner in the UK was still far better than the horror of the trenches of the First World War or the daily bombings the RAF meted out only 20 years later in the Second.

Some, however, lived a totally different life. The officer class were ‘imprisoned’ in stately homes and castles, sometimes the finest the British Isles had to offer. Some officer camps weren’t even behind barbed wire but relied instead on a sort of gentlemen’s agreement; don’t try and escape and you’ll be treated well. A kind of live and let live, this was certainly the case during the First World War when a chivalrous code still hung on by a thread and the gentry on both sides were expected to lead by example if not live by them!

Food for the German officers in Britain was abundant and even exuberant. Fine wines from France and whiskies from Scotland were offered to those of blue blood or at least those born into a lavish lifestyle. Barons and counts of the imperial German army were waited on better than those at the front. No wonder most wanted to stay. That was, except, for Pluschow.

Not from the nobility but still from the officer class this naval aviator from the Marine-Fliegerabteilung had no intention of staying put.  A veteran of Germany’s struggle in Kiaochow in China (modern day Jiaozhou), Pluschow had already been recaptured in Gibraltar during a previous escape attempt and was shipped to Donington Hall in Leicestershire where it was assumed he would remain for the rest of the war. How wrong the British military authorities were.

Pluschow was to make front-page news and cause all sorts of problems in his escape to freedom. With his dragon tattoo and high-pitched German accent it’s a miracle he was on the run at all!  He was far from your average German POW and was something of a celeb in his home country, already, due to his flying exploits and acts of heroism in the name of aviation prowess.

Here, in his own words, is his incredible story. Well written and without the nonsense of fiction to clog or bog it down it is a straightforward and glamour free story from a man who, quite frankly, you learn to love and marvel at.

He was the only one who got away from British shores during both World Wars.

That is some achievement, not only on the part of Britain’s war time security but all the more so because of Plushow’s grit, determination and tenacity to overcome unbelievable odds to win.

Books come thick and fast and first hand accounts of life at war are no exception.

Here though is a touch of genius – a fresh new angle of fighting one’s own war. 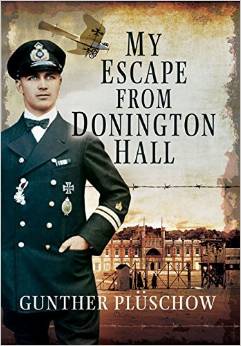