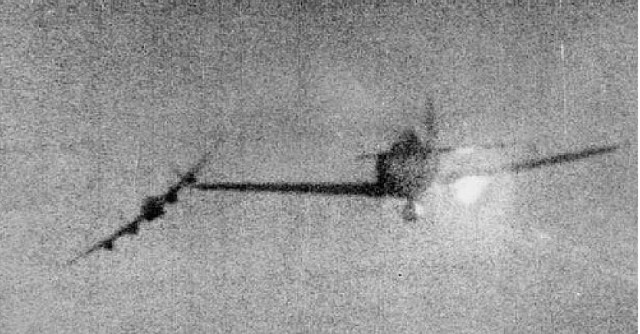 Watch the Allied fighter squadrons take to the sky in the pursuit of the destruction of Nazi Germany’s Luftwaffe in this British Pathé newsreel from WWII.

In this amazing mix of gun camera, footage and footage taken from the bomber fleets that the fighters are defending you will see the dogfights that changed the course of history. Slowly but surely the Allies take over control of the skies over occupied Europe, one Luftwaffe figther at a time.

See the bomber formations fly on, through enemy flak and fighter attacks while the long range P-40 Thunderbolts, P-51 Mustangs and P-38 Lightnings swarm around them in defense. Intermixed it he Allied footage is captured German gun camera footage of their attacks on the seemingly endless streams of Allied bombers

Be sure to watch the moment where one Luftwaffe fighter pilot manages to escape his stricken airplane and parachute out to safety.