Watch the 101st Airborne Division Silver Star awards ceremony, which took place on 20 June 1944 at the Place De La République in Carentan, France. The footage from this video has virtually never been seen before.

At the ceremony is Major Maginnis, the military superintendent of the city and acting Mayor Mr. Joret, in this role because of the death of Doctor Caillard, who was killed on June 6, 1944. The commander of the 101st Airborne Division, Major General Maxwell D. Taylor, is also there front and center, standing proudly facing his men.

The battle of Carentan, fought by the Allied forces against Nazi troops, occurred between the 10th and the 15th June 1944. The city became the scene of a fierce conflict in the weeks following the events of D-Day and the Normandy landings. It was imperative that Carentan be wrested from the hands of the German military, so as to establish a continuous defensive line against any counterattacks while the Allies linked up with the Utah Beach and Omaha Beach front lines. 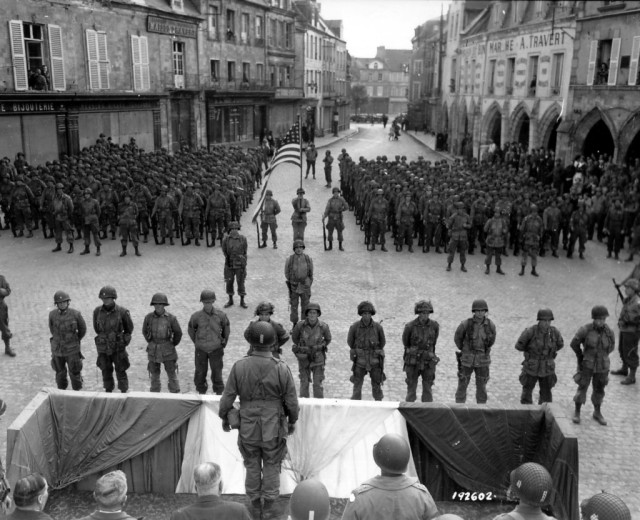 After months of planning, the Allies launched the largest amphibious landing in history, on the 6th of June 1944. The mission went by the code-name Operation Neptune, although today we remember it as D-Day. Hundreds of thousands of soldiers stormed a number of key beaches along the Normandy coastline, in the north of France, and eventually they managed to secure positions at all the targeted locations.

However, the leaders of the Allied armies were well aware that the Nazis were not going to go down without a fight. German troops had successfully occupied France for some time, and it was inevitable that they would attempt to stage ferocious counterattacks against their enemies.

At this point, the Allies were still vulnerable, as their forces were split along the different beaches. It was therefor essential that the invading armies established a continuous defensive line between the different beaches. To allow this and to prevent major German interference, several key towns and cities had to be taken, including Carentan.

The Nazis were defending the city with four divisions of the Wehrmacht – 2 regiments of the Fallschirmjäger-Regiment 6 (6th Parachute Regiment) of the 2nd Fallschirmjäger-Division and two Ost Heer battalions.

The German officers had ordered reinforcements to Carentan. However, the 17th SS Panzergrenadier Division, heading to Carentan, was delayed by the unavailability of transport vehicles and because of aircraft attacks by Allied bombers. This left an opening for the attacking 101st Airborne Division, which had been ordered to seize Carentan from Nazi control. The 101st Airborne then landed by parachute and glider on the 6th of June on the outskirts of the city.

In the ensuing combat, the 101st pushed forward across the causeway into Carentan on the 10th and 11th of June, 1944. A shortage of ammunition forced the German forces to retreat on the 12th of June. The 17th SS PzG Division launched a counter-attack against the 101st Airborne on the 13th, and initially the counterattack was successful. However, their efforts were thwarted by the Airborne troops, who had been reinforced by the U.S. 2nd Armored Division of the CCA (Combat Command A).

In this footage, viewers can watch the soldiers who fought in the battle to bring about the liberation of Carentan as they are honored for their bravery and sacrifice. The presence of the local French populace, who applaud heartily at several points, makes the scene all the more poignant.