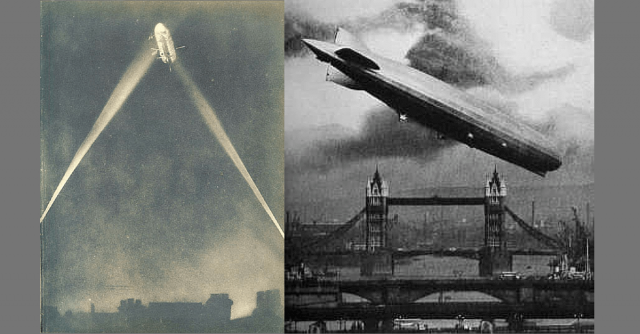 The Blitz and Battle of Britain are infamous in British history as the first time Britain had been heavily bombed from the air. But what is little known is that one of the first bombing raids that took place over the British Isles was during World War One.

In May 1915 a German Zeppelin airship took off from Germany and made its way to London, where it dropped bombs over the north of the city. It was the first time that London had ever been attacked from the air.

Britain had already been at war for around 10 months when the bombing took place. Some had anticipated that Germany would launch bombing attacks on the capital as soon as the war started, but the Germans had to adapt and develop their zeppelin fleet so that they could be used for bomb raids. In addition it is believed that Kaiser Wilhelm hesitated at attacking Britain from the air since he had such close connections with the British royal family, and thought that the war would not continue for very long. But as the war continued he finally approved the bombings.

The Germans used two types of airships to bomb London – the Zeppelin and the Schütte-Lanz. The Zeppelin was made of aluminium and linen and was filled with hydrogen to make it float. Underneath the giant balloon, a ‘gondola’ capsule hung containing the control room, engines, propellers, bombs and crew.The Schütte-Lanzwas similar to the Zeppelin but was made of wood.

As the first attack took place on London, Winston Churchill, who was then First Lord of the Admiralty, was responsible for defending London.

There was no anti-aircraft weaponry available at that time, but small gun posts were placed around London and a fleet of aircraft were kept on call should the Zeppelins arrive.

The German’s first Zeppelin raid on London was commanded by Hauptman Erich Linnarz. The aircraft carried around 120 bombs weighing about 1.5 tonnes. The first bombs fell on the North London suburb of Stoke Newington.

The Germans had no specific targets but had just been told to bomb London. Dalston, Hoxton, Shoreditch, Spitalfields, Whitechapel, Stepney, Stratford and Leytonstone were all hit during that first raid. Around 35 people were injured and seven people were killed, the History Extra reports.

The Zeppelin had largely remained unnoticed since it was a night time raid and local police only had a few minutes warning that it was over London.

Around 15 aircraft were ordered to find and destroy the Zeppelin, but only one pilot found it and his aircraft experienced engine failure before he could attack. While the survived its first bombing raid, just a week later British bombers attacked the air base where it was stored and destroyed it.