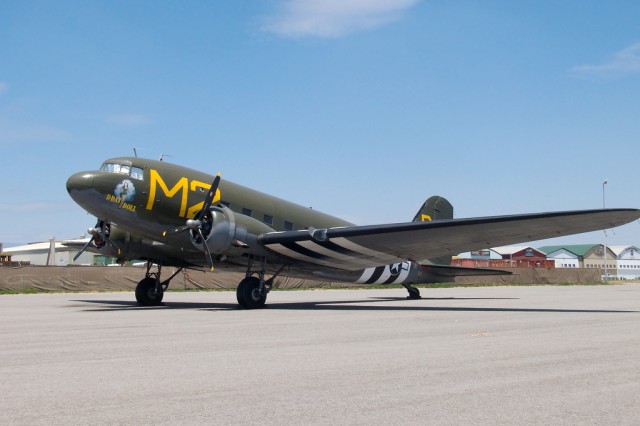 ‘Mayday! Mayday!’ screamed the Pilot of a World War 2 Skytrooper during a flight last week, the plane was almost on a nose dive seemingly due to an engine failure. In this nightmarish situation the pilot of the C53 Skytrooper Richard Hammerschlag and co pilot Gevin Harrison seemed very contained and in control, primarily because this was a simulation and not a real engine failure situation. Both the pilots were testing a twin-engine Second World War Skytrooper dubbed as ‘D-day Doll’ after it went through an engine overhaul that took almost a year.

A large number of audiences witnessed the aircraft cruising above Riverside Municipal Airport, after it stayed out of action for nearly a year. The aircraft had a very severe brush with annihilation when during a routine flight to Los Alamitos last fall at nearly 4500 ft.; a valve on its 1200 horsepower engine suddenly broke off puncturing a critical piston. The pilot of the aircraft Hammerschlag, who flew the World War 2 Skytrooper for more then 25 years, described the ordeal as a very emotional time. Almost three minutes into the flight they felt brutal jolts coming from one of C53’s powerful engines. Hammerschlag quickly turned the aircraft and safely landed back in Riverside without any major problems.

On Tuesday last week both pilots performed a number of steep turns and difficult maneuvers to test the stability and sustainability of its piston engines . Harrison expressed immense gratitude while flying the plane, he said that he always wanted to fly one of these massive planes and his dream came true when he flew the ‘D-day Doll’, the PE.com reports.

The plane was received by the Inland Empire Wing of the Commemorative Air Force in 2001, and was given the famous nickname ‘D-day Doll’. Commemorative Air Force is primarily a volunteer group that undertakes the difficult task of restoring the historic planes from the past and then flies them for public viewing. CAF tries its best to keep its aircraft in great working conditions, but for many of these almost seventy years old aircrafts restoration process never really finishes.

The C53 Skytrooper built by Douglas in 1943 played a very vital role in the D-day invasion of Normandy. The plane took part in three drop-offs flying from RAF bases, crossing English Channel and dropping 28 troops at a time inside enemy territory. Most of these troops could not make it, but their memories are embedded in the ‘Doll’ for the future generations to experience.