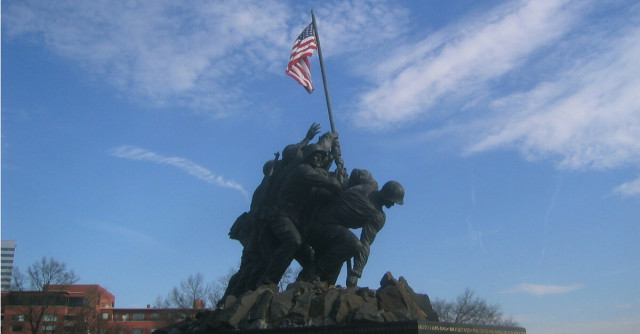 U.S. WWII veterans from around the country gathered in Arlington, Virginia, to remember and share stories of their involvement in the 1945 battle of Iwo Jima. One of the most decisive battles in the Pacific.

The Battle for Iwo Jima was fought in the Spring of 1945. They US needed the islands to prepare the way for the eventual invasion of the Japanese home islands. Iwo Jima was not just strategically important it was regarded as part of Japan, in Tokyo. The Japanese were determined that no Americans would set foot on the island and live. They turned the island into a fortress. They build countless bunkers around the island and use caves from which to attack and hide from US forces. When the American Marines landed it resulted in one of the most brutal battles of the Pacific War. The Japanese combined conventional and guerrilla tactics and this led to many American casualties. The Japanese fought to the death. The battle for Iwo Jima has gone down in American military history for its ferocity. Veterans of this battle are widely respected to this day, for their role in Iwo Jima.

The retired military men joined together at the Marine Corps memorial to commemorate the 71st anniversary of the start of the battle and to honour those who survived the war as well as those who died in the line of duty. This is an annual event, but sadly every year, there are fewer veterans. Many of the veterans are in their nineties and every year , many pass away.

Wreaths were laid and the men took it in turns to tell their stories; some stories had everyone laughing along nostalgically at the telling, while others caused tears of sadness.

One Army Air Corps veteran fondly joked: “I had gunnery six times, I never got a medal!”

Members of the public stopped to pay their respects to the honourable group of veterans. Some took photos and left flowers. This is a testament to the respect still felt by Americans of al ages for veterans.

A member of the group, Colonel Benjamin Watson, said of the fallen: “Not only do we not forget and we capture the memories in the memorials like the Marine Corps memorial here, but they are not alone. They have brothers and family members from all over the world.”

The annual memorial is a fitting tribute to all those who sacrificed so much on that rocky island in the Pacific, in the name of freedom and liberty.