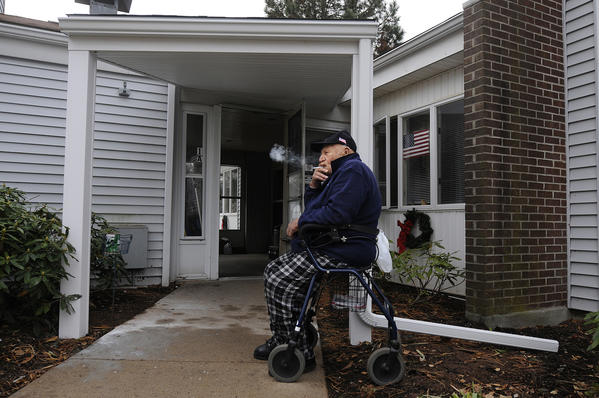 The World War II veteran of Newington can now smoke outside of his apartment. This time with a canopy over his head.

The WWII veteran made it to the news when he nearly got evicted for breaking the smoking policy of housing authorities of the complex.

After a long legal battle, the veteran grabs the attention of the media once again. This time, his name is all over the news for getting a canopy outside his apartment so he can get cover from the elements while he smokes.

Andy Nowicki, now 90 years old, also gets to keep his apartment. In a settlement last September, Nowicki was allowed to remain in his residence in Cedar Village as long as he complies with the smoking policy of the complex.

Nowicki and his wife who suffers from Alzheimer’s disease nearly got kicked out because of his habit of smoking outside his house in the breezeway. He was informed last summer by housing authorities to move out because his smoking caused disturbance to neighbors.

He picked up the habit during the World War II when Uncle Sam issued free cigarettes to soldiers. For 70 years, he went into a cycle of smoking to quitting to smoking again until he gave in to the habit.

He claimed that he cannot smoke at least ten feet from the building, the designated smoking area. He had difficulty in walking due to old war injuries and old age. Andy Nowicki is disabled and relies on his motorized wheelchair for mobility.

As part of the settlement, Nowicki must comply to the smoking policy. The housing authorities, in turn, will make sure that Nowicki can easily access the outside of the breezeway. A canopy was installed last week to serve as cover for Mr. Nowicki when he smokes outside during inclement weather.

Out of consideration for Nowicki’s condition, authorities are to make the complex handicap-friendly including with the building of the awning.

The Fox CT reports that the canopy was constructed from materials donated by the Connecticut Department of Veterans Affairs. The labor for the construction was also made free-of-charge.

“Cal Caldarella, a builder in Old Saybrook, called me up and offered to put the new roof on for free because his father was a World War II vet. He read about it. He wanted to help Mr. Nowicki,” said Senator Paul Doyle who also offered his legal services to Nowicki.

“What this man did, for our country and to be subjected to the type of situation he was, at his age, with an ill wife, bothered me,” said Caldarella. Caldarella is the owner of the MDC Coroporation which is a general contractor for houses in Old Saybrook.

The labor for the construction of the awning was volunteered by Caldarella’s crew. It took three crew around ten hours to construct the canopy. The roofing was their gift to the veteran, a humble tribute for the World War II veteran as for Caldarella and his crew.

“It was one way of giving back to a veteran, first hand, who was in need. And, that just feels so good,” said Caldarella.

Another part of the deal between the WWII veteran and the Newington Housing Authority states that the Nowicki’s have the option of moving into a new housing unit that is more fully handicap-accessible as soon as it becomes available.