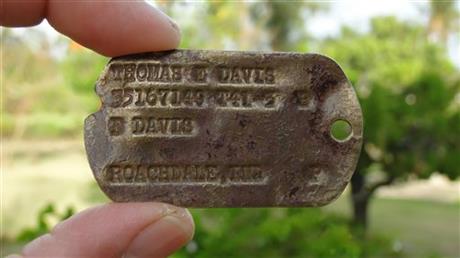 An army dog tag belonging to a U.S. WWII soldier has been found in a farm field in Saipan, Japan. The now-rusted tag is inscribed with the name Thomas E Davis, an officer who, after fighting on Saipan, was killed during one of WWII’s most fierce battles, the battle for Okinawa, which started on April 1, 1945.

Davis served in the 165th Infantry regiment of the 27th Infantry Division for the New York National Guard. Davis was a decorated officer, honored with the Silver Star for rescuing a wounded fellow soldier in June 1944. Eight months later, and three weeks into the start of the invasion of Okinawa, Davis paid the ultimate price in a heroic attempt to save a soldier’s life; he was shot down and killed by Japanese sniper fire.

The dog tag was discovered in early 2014 by cultural historian Genevieve Cabrera. The area of farmland where the tag was found is still littered with WWII flotsam, including unexploded shells. However, Cabrera said that it is unusual to come across dog tags because they are worn around soldiers’ necks specifically with the purpose of identification in instances of injury or death.

Cabrera handed the tags over to members of the Japan-based organization Kuentai, who were responsible for the successful retrieval of the remains of five 27th Division soldiers on the Pacific Island of Saipan. Kuentai recently advised the Associated Press of the discovery so that they could take on the work of reuniting the tag with Davis’s family. With the help of an archivist for the Putnam County Public Library, Anthony Barger, members of the Davis’s family were traced and arrangements are being made for the safe return of the dog tag.

The family have said that it is quite likely that Davis’s nephew and namesake, 57-year-old Tom Davis, will be given the dog tag to keep.

On the day that Davis left home to serve in the U.S. army, Davis’s sister, Dorothy Hollingsworth, was only seven years old. She had no idea that day would be the last time they would ever see each other.

In the 70 years since Davis’s family learned of his death, Dorothy has treasured the fond memories she has of her brother. “He was always laughing and singing and whistling,” she said.

Davis was one of seven children. His mother died when he was a young boy, leaving him and his older brother with their father on the family farm in Roachdale in Putnam County, Indiana. His father remarried and went on to have a further five children, including Dorothy, three boys who have all since died and another girl; Davis’s other half sister, Hazel Priest, is now 81 and lives in Victoria, Texas.

The lucky discovery of the dog tags has helped the family to remember their long dead relative and the sacrifices he made for his country. They are all proud of Thomas E Davis’ bravery to this day.