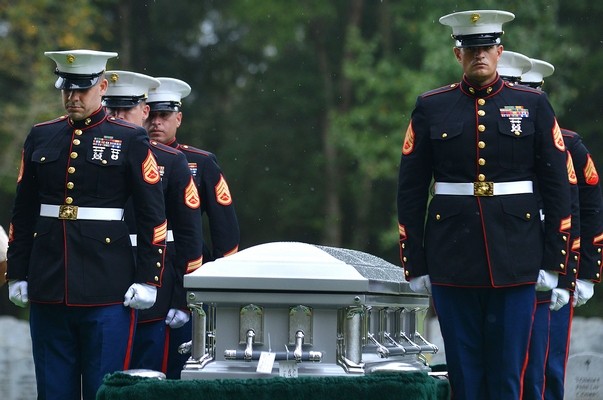 According to their family, twins James and Michael Reilly were inseparable. They grew up in Queens, New York City, and did absolutely everything in each other’s company. After the US became part of WW2, the twins even enlisted in the Marines together in the fall of 1942, completing boot-camp together at North Carolina’s Camp Lejeune.

Just one short year later, the Reilly twins landed at Tarawa in the Pacific and were wading ashore together in an assault wave by the 8th Regiment of the 2nd Marine Division.

They had just landed at Red Beach and were trying to make shore when they came under enemy fire. Michael found cover under a pier with other Marines, but just 10 feet from him James was hit and mortally wounded before he could reach cover.

As a result of the short three-day battle on the tiny atoll, over 1000 Marines were killed, 2000 more were wounded, and over 500 sailors and marines were reported as Missing In Action.

James never made it back home to the United States, having been buried in a grave close to the shore, along with 36 other casualties, their graves were lost.

The military performed recovery operations when the war was won, but many remains could not be recovered, including James’. However, in June of 2015, History Flight, a non-profit organisation from Florida, announced it had recovered remains from a military cemetery on the Pacific island of Betio. in the Tarawa Atoll of the Republic of Kiribati.

History Flight transferred the remains to the US military so they could be properly identified. In September, the Pentagon told Maureen Reilly, Michael Reilly’s daughter, that her uncle’s remains had finally been found. “The first thing that came to my mind was, I wish my dad was alive to know he came home,” Maureen  told The Associated Press. Pfc. James P. Reilly will be re-buried at Florida National Veterans’ Cemetery in Bushnell, the Daily News reports.

When Michael Reilly returned home after the war, he became a detective in the New York City Police Department where he worked until he retired and moved to Florida. He passed away in 2005. Maureen said that Michael’s children were never allowed to speak of James’ death. “He buried it pretty deep. I think it was his way of coping,” revealed his stepdaughter, Mary Smith, from Ocala, Florida.

The twins have finally been reunited on their birthday, when they were re-buried together with full military honors. Although he never got to see his brother’s body returned, Michael’s children say they know that it will give him peace. “I know he’s looking down and he’s happy,” his daughter Mary said.