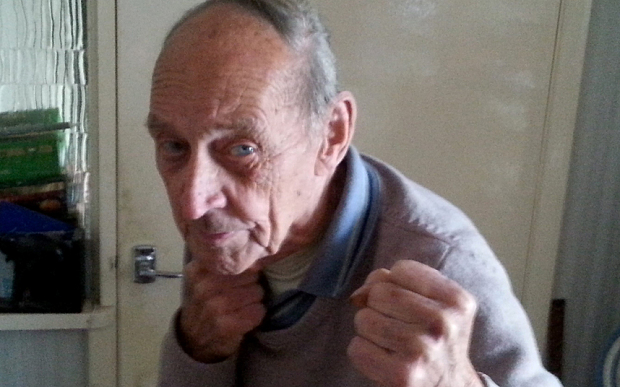 A World War Two veteran has saved his own life when he had to fight off two burglars who tried to rob his house.

Kenneth Brown, who is now 88 and lives in Kent, says that he automatically used his army training that he was taught more than 70 years ago to fight off the robbers and defend himself.

It was the afternoon one Sunday when Kenneth heard some banging on the window. He wasn’t sure who it was but saw two young boys outside of his house, so he opened the front door to see what they wanted.

Unfortunately the two teenagers barged their way into Kenneth’s house as soon as he opened his front door. They had a knife to threaten Kenneth with and ordered him to give them his money.

Kenneth says the defence skills he learnt in the army immediately came to mind and he reactively punched one of the boys in his chest.

They immediately ran away in shock and didn’t retaliate or try to hurt Kenneth. They jumped into a car that was waiting for them at the side of the road, but luckily neighbours had taken down the registration number.

Kenneth called the police and the two boys were apprehended later that day. They were found to be 19 years old so were sentenced to stay in youth custody for between a year and a year and a half.

Kenneth says he didn’t consider that he might have put himself in even more danger by fighting back against the boys. He thinks he could have continued fighting back, but since the boys ran away he didn’t need to.

The judge who sentenced the boys said that Kenneth had acted bravely and had reacted quickly. She commented on the disappointment that one of the boys had not pleaded guilty to the crime until the trial had begun and thus put a delay on the proceedings from day one. The judge commented that he was trying to avoid taking responsibility for the crime, The Telegraph reports.

Kenneth served as a soldier in the British Army’s Somerset Light Infantry during World War Two. He mainly served in the Pacific theatre of the war in Asia. He says it was near to the end of the war in Europe, but that in Asia the Allies still had a big fight to tackle against the Japanese.