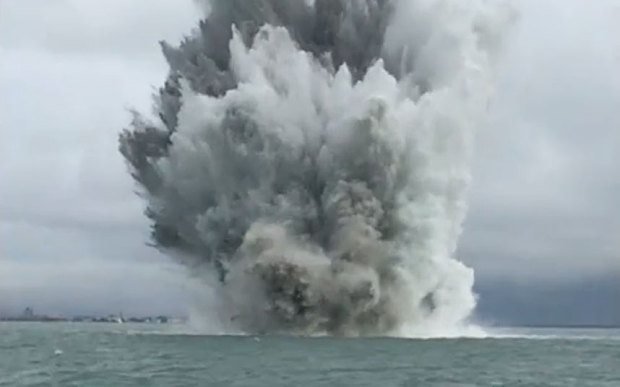 During World War II, the U-boat fleet, which dominated much of the battle of the Atlantic, was small at the beginning of the war and much of the early action by German forces involved mining convoy routes and ports around Britain.

Initially, contact mines—requiring a ship physically strike a mine to detonate it—were employed, usually tethered at the end of a cable just below the surface of the water. Contact mines usually blew a hole in ships’ hulls. By the beginning of World War II, most nations had developed mines that could be dropped from aircraft and floated on the surface, making it possible to lay them in enemy harbours.

The use of dredging and nets was effective against this type of mine, but this consumed valuable time and resources, and required harbours to be closed.

Later, some ships survived mine blasts, limping into port with buckled plates and broken backs. This appeared to be due to a new type of mine, detecting ships magnetically and detonating at a distance, causing damage with the shock wave of the explosion. Ships that had successfully run the gauntlet of the Atlantic crossing were sometimes destroyed entering freshly cleared British harbours.

During and after the war most mines have been cleared but every now and then one re-appears and needs to be take care off.

Just recently, the Royal Navy in England released footage of the blowing up a German mine.  The mine weighed 1,500 pounds and was found near Solent.  The leftover mine was found by a crane that was dredging the strait.

The bomb disposal team – also fully-qualified clearance divers – towed the air-dropped device overnight to open waters about 1.5km off Bembridge, Isle of Wight, where they carried out a controlled explosion at 1045 am on November 27th.

The video wasn’t released to the public just for their enjoyment, but for educational purposes for the younger generations.  The power behind the explosion is something to see. Now people can imagine just how much destruction these mines caused during the war, and just how dangerous are the many that are left in the vast depths of the ocean. The explosion caused by the detonation of the mine created a 1,000-foot high plume of water.

Petty Officer (Diver) Richard Ellis, Bomb Disposal team leader said in a statement “These mines were laid in their thousands during WWII but are rarely encountered these days – it’s only the second one we have dealt with in three years”

The officer also says that before detonating the mine, he got a good look at it and was surprised to see just how good a condition it was in.  He believes this is why it has stayed so safe all these years.