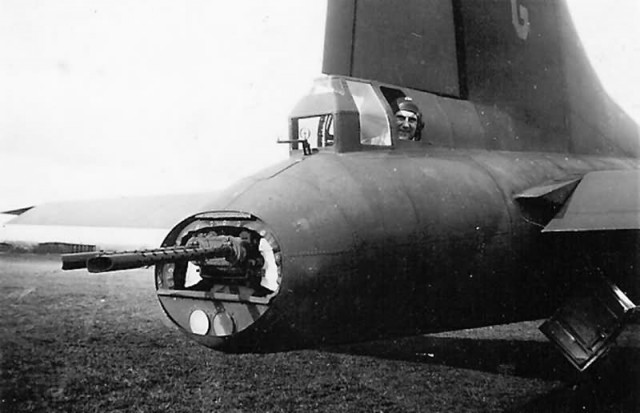 As time has passed and the 70th anniversary of the final year of the Second World War has been reached, most surviving servicemen are now well into their nineties or are centenarians, and the world is slowly losing the remaining veterans of the Second World War. For instance, about 16,000,000 US citizens served in the Second World War. Now, in late 2015, only some 850,000 survive. In these circumstances, personal testimony becomes ever more important, as these survivors become fewer and their voices and memories fade.

One such survivor was recently talking about his time as tail-gunner in a B-17 Flying Fortress bomber in the Second World War. He is Don Anderson, who is now 93 years old and lives in Sherwood, Oregon. He remembers the time toward the end of the war when, still in his teens, he thought his luck had run out.
Anderson grew up in the town of Arlington in Washington state, and in 1943 had just left school at 18 years old when he was conscripted into the army. After a rushed aviation training in Utah, where he hoped to qualify as a pilot, he was sent instead to become a gunner.

Shortly after that he found himself as a newly trained tail-gunner in a B-17 bomber for the 401 Bombardment Group of the 8th Air Force‘s 1st Air Division. Anderson was stationed in the county of Northamptonshire in the east of England, at the Deenethorpe airfield, as one of a crew of nine for a B-17 Flying Fortress they named The Joker.

Anderson took part in a bombing mission on 3rd February 1945, with a thousand other B-17s. The destination was Berlin and it required nine hours of flying time to get there and back.

Anderson recalls how he was hunched up in the tail-gun bubble, and how vulnerable he felt there. As he says, getting rid of the tail-gunner was the first goal for the defending German fighter pilots. He had to try to prevent this from happening.

One advantage to Anderson and his mates was that the Luftwaffe’s fighter defence strength had by this time been seriously weakened by previous raids on the factories that made ball-bearings and other parts.
Before this, B-17s, along with many other bombers, had suffered very high losses. Anderson acknowledges his luck, saying, “By the time I was there, the losses were down to … 3 per cent.” Even so, on his own mission he had seen B-17s being hit by ack-ack fire, and remembered seeing a few crashing to the ground.

As it happened, they managed to drop their bombs, bank the plane and return to England unscathed. But he recalls flak exploding very close to his aircraft before they had had a chance to drop their payload of bombs. He recalls how certain he was that he wouldn’t survive the night, and remembers feeling very calm. He says it was common for people in those circumstances to feel resigned and simply await their fate. To some extent they had no control over their fate.

Anderson flew on 23 bombing missions. He received a US Army medal. After the war, still only 20 years old, he returned home intent on marrying and settling down. He worked at a radio station and later in ambulance and fire protection work, the Pamplin Media Group reports.

Don Anderson keeps many mementos of his time as a tail-gunner in one of the famous Flying Fortresses during the Allied war effort in the Second World War. Only one of his fellow crewmen remains alive. Anderson has written an autobiography called simply Donald.