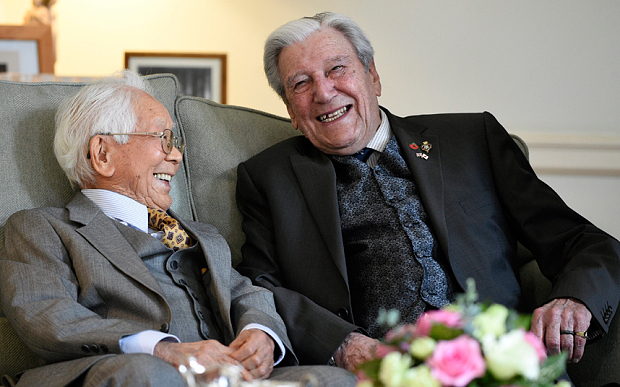 World War Two British and Japanese veterans have reconciled and shaken hands more than 70 years after the end of the war.

The Japanese were prevented from advancing into India from China by a fierce battle that saw Allied forces pitting themselves directly against the incoming Japanese.

A reception has been held at the British Embassy in Tokyo to bring together veterans from both sides for the first time. Two of those included British Army veteran, Roy Welland and Japanese Imperial Army veteran, Mikio Kinoshita.

Now both in their 90s, they faced each other 70 years earlier at Kohima in North-East India. Their meeting this time saw them exchange gifts and shake hands, rather than exchange gunfire. The reception has been held in order to promote reconciliation between the two countries on the 70th anniversary of the end of World War Two.

Roy said that he was happy to be able to travel to Japan, where he says that everyone has been kind and friendly. He was stumped for words to describe the meeting with the Japanese veterans who were once his enemy.

Roy said that he was quite overwhelmed and that the meeting was full of meaning for him. He took with him original photographs of the Battle of Kohima memorial and presented them to Mikio and another veteran, Mr Urayama.

Roy is from Colchester in Essex and during the war was part of a Special Forces unit, which was operating in Norway. He was then deployed to the Royal Berkshire Regiment and was sent out to the Far East in order to stop the Japanese troops from advancing further south into India, The Telegraph reports.

There were two major battles at Imphal and Kohima in the spring and summer of 1944. The British and Indian troops were greatly outnumbered Japanese, and they fought desperately to hold the line in India’s north.

Finally, the Japanese retreated and the battle at Kohima is thought of as a turn-around point in the Asian theatre of war since the Japanese were defeated.

Roy says that he took with him difficult memories and nightmares from his experience during the war. He finally made his first trip to Japan just last year when he took part in a Remembrance Day memorial service at the Commonwealth War Cemetery in the Hodogaya district of Yokohama.