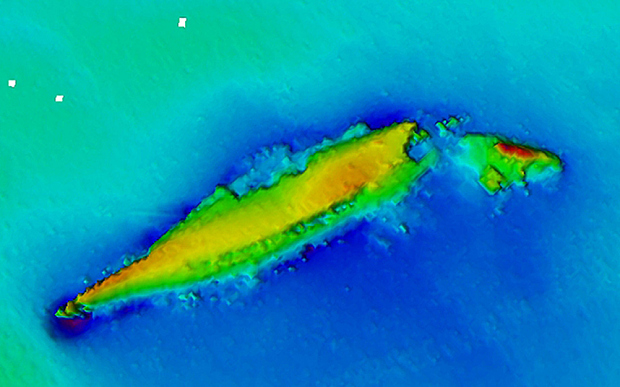 The Battle of Jutland during World War One has been brought back to life as the latest technology in under water investigation identifies the wrecks.

One hundred years since World War One the wrecks have sat at the bottom of the North Sea ever since.

The scans of the sunken ships show 3D images of the ships that sunk during one of World War One’s largest battles at sea.

There are around 25 warships at the bottom of the North Sea, which were all sunk during the Battle of Jutland in 1916. Around 14 of the ships are British.

The British Royal Navy’s HMS Invincible set sail for the first time in 1907, but was destroyed just nine years later during the battle. When it was destroyed by a German torpedo around 1000 crewmen died. Other Royal Navy ships include the HMS Defence, HMS Black Prince and the HMS Queen Mary.

The scans of the bottom of the North Sea were undertaken by the Royal Navy in order to find out more about what happened during the Battle of Jutland.

Researchers reported that the conditions of the ships’ remains vary considerably. Some have been attacked by salvagers who try to take metals and goods from the ships for selling on. Others are in very good condition and are almost in one piece.

The scans have provided more accurate detail than the reports of the battle at the time. The reports from the HMS Defence said that she had been annihilated, but the scans show that she was pretty much still intact. Researchers said that she is still upright on the sea bed and she can be instantly recognised because of her layout and arms. Her guns are still facing outwards which would have been aimed at the enemy.

The Royal Navy ship which undertook the scans was the HMS Echo. It took data from expeditions that had been made in the past as well as accounts from the actual battle. It assessed and analysed about 21 wreck sites during the research trip.

Nine ships in all were located, all were lost during the Battle of Jutland. At the end of the research tour, crew of the HMS Echo participated in a service of commemoration for those who lost their lives, the Sky News reports.

The Battle of Jutland was between Allied and German naval forces just off the coast of Denmark. It was the single, only naval battle of World War One.  Around 7,500 crew lost their lives, around three quarters of those were British.

No one side conceded defeat.