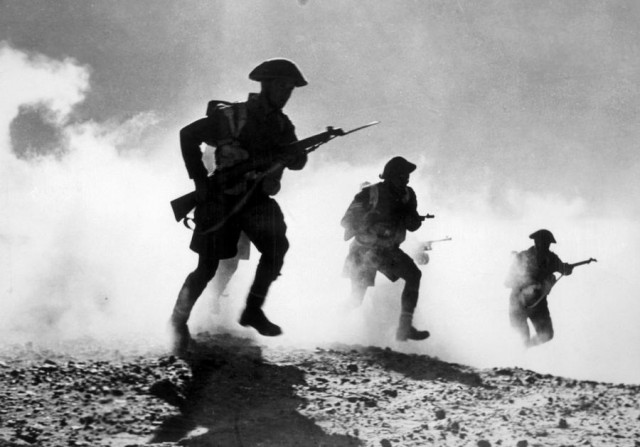 It is very hard to imagine in 2015, the life and times of the people who lived through the most brutal clash of human history, the Second World War. People who endured this ‘mole’ on humanity were scarred for rest of their lives and everyone had a story to tell. Following are the tales of some WWII veterans who contributed in the war and came out victorious.

I was so keen to join Royal Navy that I had to lie to get in. I was only 15 and I said I was 18. When I got there to get admitted I was rejected for being too young. I was hanging around disappointed when an officer saw me and asked why I was wandering around here. I told him I came to join Royal navy and was told to come back later when I will be older. He asked me to have a walk around and come back later, recruitment officer would be changed by then and you will be older. That was exactly what I did. But I accidently got admitted in merchant navy that was not my aim. But later I transferred to active Royal Navy. Most of my time I worked in engine room, where it was too noisy that made me deaf in both ears. I thought I was the only one in my family to have contributed in the war, but my wife had a secret too. She always said she works in an officer but would never tell me where. She told me in 1976 that she worked for Bletchley Park all that time, and that she was not allowed to talk about it. That was a proudest moment of my life.

War is hard, and whoever said that they never got afraid of it, were lying. War scares you. After the war I thought my life would be a disaster but my wife brought my life together piece by piece.

I think my job was quiet critical, I worked on an anti-aircraft battery and my job was to precisely determine the height of the target plan. This enabled the battery to launch the fire appropriately with effective result.

The war was not easy at all, the pressure of the work and then all the inspection and check ups by the Army. Being a woman, I felt quiet an unease with regular FFI inspections, to see if we were having any infection or disease. Every morning there would be two queues for inspection, one for men and one for women. Men drank bromide in their tea to keep them ‘good’.

Life after the war was equally challenging. I went into women fashion, this was something I always wanted to pursue. During the war the only fashion related activity we could do was to cut our long knickers short to make them appropriate.

The victory day was a big relief for everyone, we all went to the west end and joined scores of dancing and drinking people in the streets. I lost my husband in 2002 who I met when I was 16 and got married after the war, we were together for 54 wonderful years.

I consider myself lucky, that I escaped the D-Day unscathed and victorious. I was in Marines, five of us were together during the invasion when we got attacked with a mortar shell, three of my friends died instantly.

After that I was mostly involved in the Pacific theatre, I was in Hong Kong when Japanese submitted their surrender after atomic bombs. On the VE day I was in Pune, India and we were given a day off to celebrate the victory, The Guardian reports.

My wife waited all through the war to marry me, we got married after the war. I took a lorry driver job and still could not see much of my wife, obviously she was not happy at that. Soon after that I took a job as a security guard at a bank and stayed there for 30 years. My wife lost our first child in 1956, and we were told that she could not have any more children. We adopted Peter in 1965 and brought him up as our son. My family had a bunch of servicemen, whenever we sat down we share the good things but surely war was not a good thing at all.

I had the most challenging job during the war. The most effective and dangerous killer unleashed by the enemy was the network of land mines spread around on land and in sea. My job was to sweep the sea off the mines, and during the D-Day I was with my team clearing the area for the troops. On the day of invasion we started finding these massive mines that could easily blow apart a ship in thousand pieces. Every day there were news of people dying due to these mines. When the war ended most of my friends were released to celebrate with their family but I had to stay for another couple of years. I kept on clearing the mines around Ireland till 1946. Fishermen and local people still find these mines sometimes, and the mines could still blow even after 70 years.

Every day was a challenge for  us, clearing mines was a noble cause and dangerous at the same time. Now when I think about it, I wonder how was I not blown apart by one of those massive mines.

I think whoever lived through the war, was scarred in one way or another. I lost friends and my first boyfriend to WWII, I came out of war shattered and appalled by the sheer slaughter and mayhem that it brought to people.

I had a very critical job, I would inspect the planes and tick them ‘fit to fly’ after inspection, and I was only 19 at that time. Most of the mechanics and inspectors working along side me at (Royal Naval Air Station) in Scotland were women, since all the men were gone off to fight the war.

After the was I was privileged to get the opportunity to carry on my studies, since most of the women ended up in the kitchen after they were released from the duty. I ended up acquiring a degree in social work and worked as a community social worker throughout my life.

I still think about the war almost every day, and it still sends shivers down my spine when I recall the mass scale slaughter and pain people had to endure. Peace is a precious commodity we must uphold it at all cost.