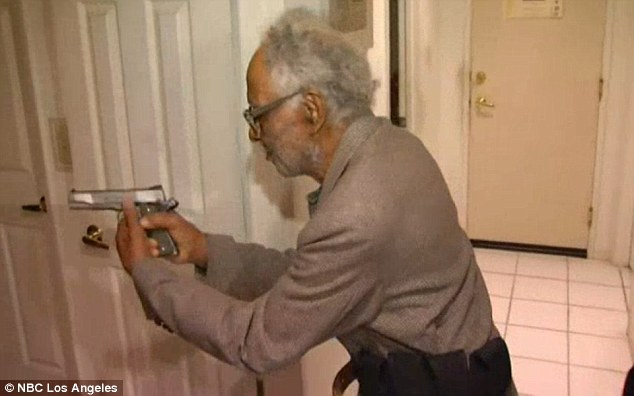 They say that old age is only a state of mind, but some people exemplify that to a greater degree than others. Joe Milspa is just such a man. He was born 1926 and is today nearing his 93rd birthday. He resides in San Jacinto, which is a little town in California, halfway between the city of Los Angeles and Palm Springs, inland to the east. He is a veteran of World War II. Mr Milspa served with the army in Europe. He later worked as a mechanic for the local Police Department. Since the death of his wife Mr Milspa has lived alone.

On January 31, Milspa needed his training and combat experience when a man attempted to break into his house. The man was carrying an axe, which he used to break through a window in order to gain entry into the house. With the window broken, the man then crawled into the house through the broken glass. But when he got inside, he didn’t find the scared and helpless old man he was perhaps hoping to find.

Joe Milspa said he heard the noise of the glass being broken and approached the door with his handgun. He has always owned a gun for his personal protection like many Americans. Milspa went downstairs with his gun. There in his own home he was confronted by the burglar a man who wanted to steal for him and maybe do him physical harm.

Joe Milspa’s warrior instincts kicked in.  Like every soldier he was not afraid in dangerous situations. He grabbed his pistol and fired a single shot in the direction of the burglar. The burglar dropped his axe – and apparently, a few other items as well, probably things he had already stolen from the house – and he escaped through the broken window.

Milspa is quoted as saying like a true American soldierly fashion, “I could have shot him right between the eyes. But I didn’t want to do that. I would have been in trouble.”

Whether that’s the truth, or just bravado, will have to be left to the reader’s imagination. Either way, Joe Milspa is considered a hero by the neighborhood. The only bad news is that the burglar who was trying to steal from an old man as he slept is still at large. The police are looking for him.

Joe’s example shows that once a soldier always a soldier- not matter your age.