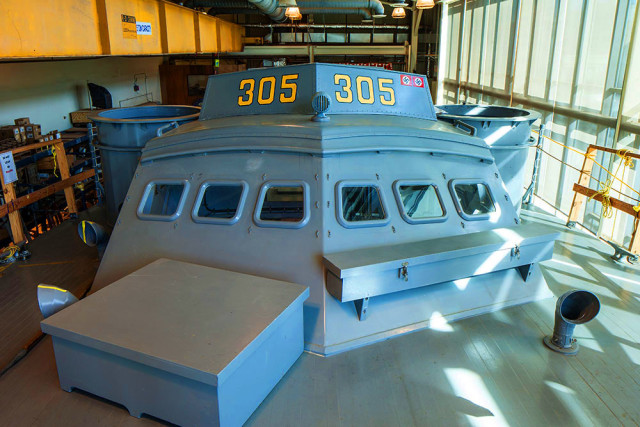 The PT-305 was bought by the National World War II museum, which plans to fully restore it with a view toward getting it back on the water within the next year to be used for public tours on Lake Pontchartrain, near New Orleans.

The boat spent World War II in the seas of the Mediterranean, where her main role was to attack German supply convoys. She was also used for nighttime reconnaissance missions  and for delivering U.S. commando troops to occupied coastlines.

At any one time, the crew would have consisted of approximately 15 crewmen, with a total of 44 crewmen posted to PT-305 from the start to the end of the war. The PT-305 spent its years since the end of the war as a tour boat in New York and also as an oyster boat and fishing charter before being bought by the museum in 2007.

The PT-305 is one of only a handful of PT boats that survived the war. It is currently housed in the museum’s restoration pavilion.  The PT-305 was in a bad state of disrepair by the time it arrived at the museum, so much so that volunteers (mainly students and architects) have spent over 100,000 hours working to restore it.  So far, two out of three new engines have been installed, the boat has been returned to its original 78-foot length, and electrical and plumbing work is underway.

The museum has just launched a campaign to raise the $100,000 to complete the restoration.  Tom Czekanski, the museum’s director of exhibitions and collections, explained how the money will be put to use: “It helps us cover all of the costs that are needed to transport the boat to the water and cover all the testing and certifications so the boat is ready to operate.”

The museum will also have to find a further $500,000 for a boathouse for PT-305 on Lake Pontchartrain. Details of and artifacts from the PT-305’s history will be on display in the boathouse for the public to view.

The historian responsible for the research on the PT-305 is Josh Schick, who used to volunteer at the museum when he was a teenager and even wrote his master’s thesis about PT boats and their role in the war. Schick has managed to track down two former PT-305 crew members.

One of them is Joseph Brannan, a gunner’s mate on board PT-305. He can vividly remember one particular incident when one of his fellow crewmen, a motor machinist, stuck his head out of one of the boat’s hatches to check that a bomb had successfully struck a German torpedo boat and was hit in the face by a piece of shrapnel, which ripped open his cheek. Brannan was tasked with holding the wound shut while they waited for a doctor to come on board and close it up.

Museum executive vice president and COO, Stephen Watson, said that the museum plans on charging between $250–$300 for 45-minute boat rides and $5–$15 for tours of the boat when docked. The idea is for the tour fees to generate enough revenue to cover the upkeep the boat’s upkeep, ensuring that it will provide future  generations with an insight into the lives of the servicemen aboard PT-305. Watson said:

“The restoration of PT-305, like all museum restoration projects, is aimed at making history accessible to today’s audiences in as detailed and authentic a way possible.”