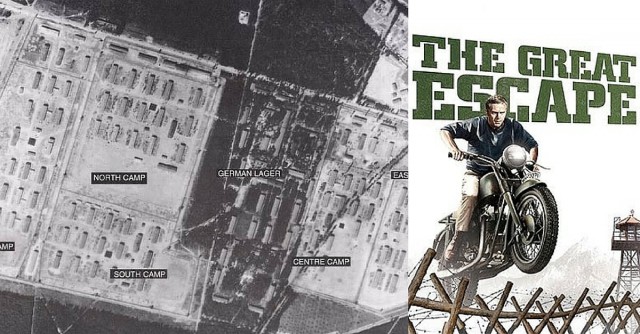 William Ash was a survivor of the Nazis’ prisoner of war camps, surviving starvation, freezing temperatures, violence and slave labor.

For the prisoners who survived you’d think they would come back to capitalist society with open arms, but William Ash came back with a thorough swing to the left.

William was a Spitfire pilot with the US Air Force during World War Two and became immortalized in the movie the Great Escape – his character played by Steve McQueen.

William had grown up in Texas in the 1930s when jobs, money and food was scarce as the Wall Street Crash hit everyone around the world.

William was made to work as often as he could even as a young boy and teenager as his father could hardly hold down a job.

He, along with most other Americans had been watching Hitler’s invasion of Europe closely and was ready to fight Fascism. William joined the Royal Canadian Air Force and gave up American citizenship to become a Canadian. He was deployed to Britain and flew Spitfires with RAF 411 Squadron. During a mission over Belgium, William was shot down by a fleet of German Luftwaffe fighter planes.

He crashed in the village of Vieille-Église in Pas-de-Calais (France). He survived and spent days avoiding German troops in the French countryside.He was finally put in touch with the local resistance by a French family.

In an attempt to get William back to Britain the resistance helped him to Paris, but after he’d arrived he was discovered by the Gestapo, was captured, interrogated, and was readied to be executed. But since he was an Air Force pilot, the Luftwaffe said he belonged to them and they sent him to the prisoner of war camp at Stalag Luft III, Our Kingdom reports.

William was transferred to many different camps during his imprisonment and would always try to escape – nothing would stop him. He tried via tunnels dug in the latrines, drains in the camp showers, and mole tunnelling whereby they dug and sealed their path with the earth they were digging behind them.

William was heavily influenced by the prison life where everyone helped each other. They shared food and traded Red Cross parcels. He was also influenced by the Russian prisoners of war who were forced into slave labor, fed less than the Allied forces were, and were worked to death.

It was this experience that made William join the British Communist Party after the war. He went on to co-found the Marxist–Leninist Communist Party of Britain. Many of the members were his fellow prisoners of war who wanted to build a better life than they had experienced.