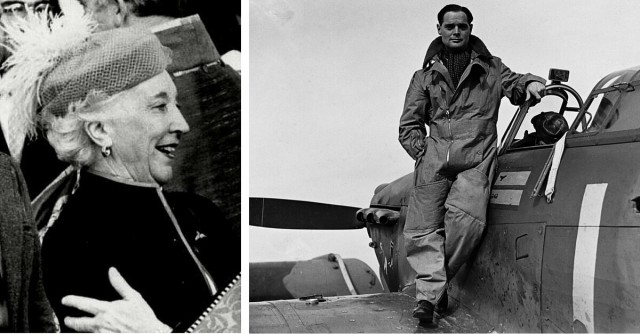 Douglas Bader was one of those rare people who become a legend in their own lifetime. Born in London in February 1910, he decided to join the Royal Air Force at the age of eleven. In 1928, aged 18, Bader won a scholarship to the Royal Air Force College at Cranwell, in Lincolnshire, graduating two years later in 1930.

He was immediately posted to RAF Kenley, where he developed a liking for aerial acrobatics. He performed in the RAF display team at Hendon Aerodrome in 1933.

In December of the same year, Bader was demonstrating his low flying skills to a group of fellow officers at Woodley Aerodrome near Reading, when he misjudged a roll and crashed. His legs were badly injured in the accident, and within a few days, both had been amputated.

Determined to walk again, Douglas Bader was fitted with artificial legs, and six months later he could walk unaided. It wasn’t enough, he wanted to resume his flying career, but a medical examination board ruled him unfit – he left the RAF and joined the Shell Petroleum company.

By 1939, war loomed, and Bader resolved to re-join an RAF that was hungry for pilots. This time, he passed the medical board and flying tests and became a Spitfire pilot, being promoted to the rank of Squadron leader. He worked hard to improve his pilots’ flying skills, and by the end of the Battle of Britain in 1940, Bader’s squadron had destroyed 67 enemy aircraft with the loss of only five pilots.

Forced to bail out of his damaged Spitfire over occupied France while escorting heavy bombers, Bader was captured by the Nazis and made a prisoner of war. He set out to make a nuisance of himself and so successful that on one occasion the Germans confiscated his legs to prevent him from escaping. He was imprisoned in the Notorious Colditz castle, and stayed there, being a nuisance, until the end of the war.

Bader went on to found the Douglas Bader Foundation for disabled people and was appointed Commander of the Order of the British Empire (CBE) in 1956. He was Knighted in 1976, for service to the disabled.

In 1973, Douglas Bader married his second wife Joan, who had worked as a nurse during the war, and together they continued to work for the Douglas Bader Foundation.

Douglas died of a heart attack in 1982, aged 72. Joan subsequently received an OBE (Order of the British Empire) for her service to disabled people. She died peacefully, aged 97, on 18th December 2015.