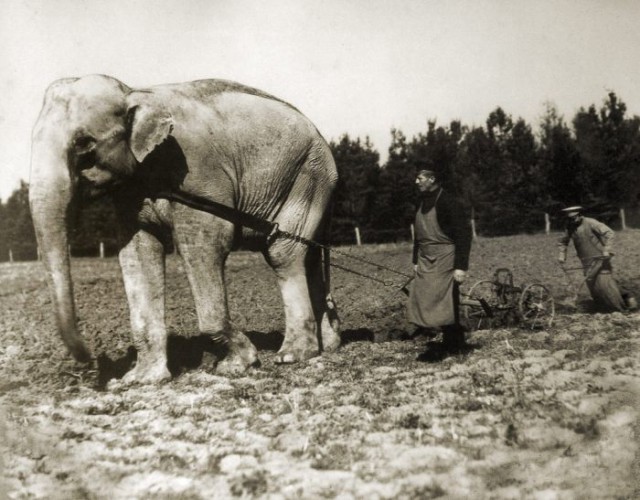 When World War One began the men and horses of Europe were transported to the frontline, leaving behind few people or animals to toil the land and ensure the homelands would still be farmed.

Now, unique black and white images have been uncovered showing elephants taking the place of horses on the farm. The elephants came from zoos and circuses, and were put to good use from 1914 onwards.

The use of elephants ensured that fertile farming land could continue to be farmed and provide vital food supplies for the country and the soldiers fighting the war.

More than one million horses and donkeys were recruited to take part in World War One when military vehicles were still not in mass use.

The elephants would plough fields, stack the cut hay, transport weapons and ammunition for the military along with other supplies in towns and cities.

Evidence shows that even during World War Two, elephants were recruited once again to support the farmers when horses were being gathered for military service.

In World War One almost two million horses were recruited for military service. It was the responsibility of the Army Veterinary Corps to provide medical assistance to the animals and either alleviate their suffering or return them to duty. Estimates suggest that around 80% of those that came in for medical help were once again returned to duty.

The horses would be used not only to transport soldiers, but also to transport and move guns, artillery, supplies and the dead and wounded. Dogs and messenger pigeons were the other animals used in the war on a mass scale, the Mashable reports.

Dog kennels were even established in Boulogne in France, so that British Army soldiers who were heading back to Britain on leave could leave their dog there and pick it up again upon their return to duty. When the war ended another kennels was set up in Surrey in Britain, so that the returning dogs could be placed in the kennels in quarantine when they returned from the war front. Once the period of quarantine was completed their previous soldier owners would come back to collect them and take them home for good.

It is believed that almost half a million horses, donkeys, camels and cows died during the war.