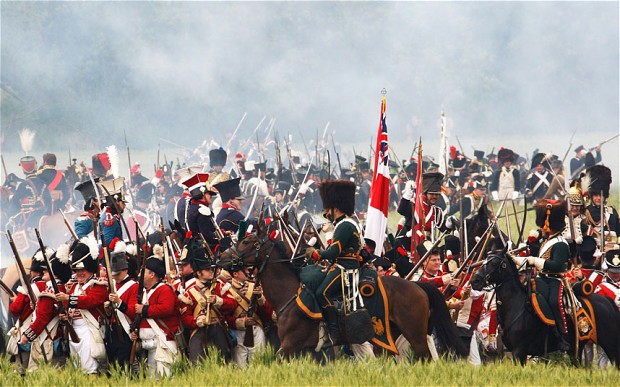 On 18th June 1815, almost two centuries ago, a mammoth French Army was defeated by a comparatively small ‘militia’ of men led by an Irish general. Famously known as the ‘battle that changed history’, the Battle of Waterloo redefined a number of terminologies in terms of war and geo-politics of 19th century Europe.

Both rivals of the waterloo battle, France and Britain hold the battle dear and emphasize the factual accounts rather than fictitious ornamentation.

Historians on both sides agree on the fact that battle of waterloo brought an end to150 yearlong skirmish between the two empires. There also seems a consensus on the notion that Britain did become a European superpower, though briefly, and was also dubbed as ‘top nation’ of European continent as a result of the victory in the battle.

There are a few myths associated with the famous European conflict, some of them are listed below.

The battle was fought at Waterloo

In reality the actual battle took place just outside the famous Belgian city, not in the city as popularly believed. The most fierce fighting between the ‘allied’ forces led by the Wellington and Napoleon Army took place on the grounds near Braine-l’ Alleud. The epicenter of the battle was the ‘Chateau Hougoumont’ farmhouse, which saw the most intense clashes between the two forces. Recent discoveries of the remains of the soldiers killed during the battle, has further clarified the myths surrounding the site of the battle of Waterloo.

Wellington’s Army was ‘All British’

Historians have always stressed the fact that Wellington’s Army was not exclusively a British Army, rather it was a mish-mash of various European groups. According to Wilbur Gary out of 74,000 troops led by Wellington only 38% were British, while a staggering 28% of the lot were Dutch-Belgians. Rest of the Wellington’s Army was fragments of various German-speaking people (Hanoverians and Brunswickers).

The Rothschilds Exploited the Battle

A few years after Britain and its Allies defeated the Napoleonic Army in the Battle of Waterloo, a conspiracy started brewing surrounding the events in the immediate aftermath of the battle. Reportedly in the summer of 1846 a pamphlet started circulating up and down the European continent, claiming to unveil some mysteries surrounding the Battle of Waterloo. The pamphlet with a rather ominous signature ‘Satan’, stated that the biggest banking dynasty of the time ‘the Rothschilds’ used the battle to make a fortune for themselves. According to the pamphlet Nathan Rothschilds, who was the founder of the dynasty, overlooked the matters of Wellington’s Army. After the battle, Nathan quickly raced back to London before any news of the battle had reached the Capital. He then used the result of the battle to play the markets and made a big fortune, The Independent reports.

In reality this was a cheap shot at anti-Semitic propaganda, since Nathan Rothschilds was Jewish. The irony is that a large number of people still hold the belief that Jews somehow manipulated politics and world events in their favor.