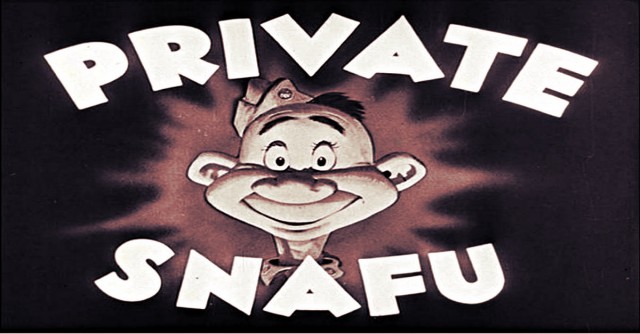 The raunchy WWII-era Private Snafu cartoons is getting its belated TV debut — 70 years after the end of World War Two.

It can be remembered that the raunchy but funny animated series was brought about by the US Army Air Force First Motion Picture Unit during the Second World War not only to entertain and lift the morale of soldiers in WWII’s battlefields but also to bring light on proper military behavior.

Yes, the antics and misgivings of the lead character, Private Snafu, were [and still are] very laughable but the team behind it made sure that every short episode taught a thing or two about what was right when it came to military decorum.

And now, the 70-ear-old raunchy cartoon series will be making its TV debut as part of a series that tackled wartime propaganda as well as training films. Private Snafu will come on TV air every Tuesday starting September in TCM [Turner Classic Movies].

Private Snafu was the creation of a powerhouse team. It was award-winning Hollywood director Frank Capra who came up with the Private Snafu character whose name was derived from the popular service acronym “situation normal all fu—d up”. The series was helmed by Chuck Jones, a veteran animator behind the well-loved Road Runner cartoons. Warner Bros. handled the animations of the cartoon series [this explains why Bugs Bunny and Tweetie sometimes have cameo roles in some of the Private Sanafu shorts] with the voice of the lead character provided by voice actor Mel Blanc, the well-loved voice of Bugs Bunny [Private Snafu and the Bugs do sound alike].

But perhaps, the most surprising part of this team was Army Capt. Theodor Geisel or more popularly known as Dr. Seuss, the author of the beloved Cat in the Hat. Who would have thought that a writer for children’s books had a penchant for crude adult jokes? But he did and that coarse yet funny wit was applied in every Private Snafu episode.

“Capra was the one who decided the best way to educate GIs about what they should be doing was to entertain them with negative examples,’’ said TCM host Ben Mankiewicz in an interview with the New York Post.

And that theme became the center of Private Snafu — Snafu demonstrating what a GI should not do: blabbing about missions while on leave, consorting with “loose women in foreign countries”, neglecting military equipment and evading the military censor above all others.

Mankiewicz pointed out that Private Snafu got killed in most episodes because of ineptness. When asked about the series’ raunchiness, he said that Private Snafu was allowed to go beyond “depictions of sexuality [one example was semi-nude women in several episodes” as well as the use of explicit-heavy language – these were only allowed on adult-themed Hollywood mainstream movies – because the series was not meant for civilian viewing.

Private Snafu was classified, literally, when it was first shown.