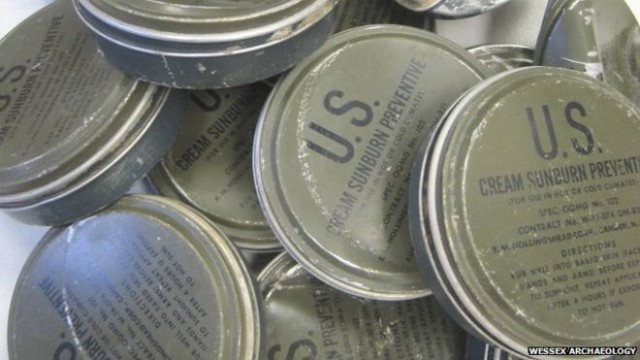 Salisbury Plain has become the focus of an unusual historical find of US Army issued sunscreen lotion.

Archaeologists are often undertaking excavations in the area because of its historical significance, which includes the prehistoric Stonehenge.

Now the researchers have uncovered what looks like World War Two US Army-issued goods that would have been given out to troops before heading off on operations in Europe.

The sunscreen lotion is packed in aluminium tins and on the outside label says it can be used whether in hot or cold weather conditions.

In addition to sunscreen lotion, tins of bacon, cooking oil and fats, and sauce were also found in the haul.

The findings have been released on display to mark Independence Day on 4th July in the US.

The researchers say that all of the goods are in excellent condition even after being buried for more than 70 years. They say this shows how well-made the goods were.

During World War Two, Salisbury Plain and the rest of the Wiltshire Plains were used as training grounds for Allied troops. The area had also been used prior to this by the British military, since around the early 1900s.

Records show that the area was used by the US military ahead of the D-Day landings and further invasions of Europe between 1944 and 1945, the BBC News reports.

The area of Salisbury Plain hasn’t been developed over the years because it has been used by the military, so it is prime ground for archaeologists looking for pieces from the past.

Other goods found include cutlery such as spoons, as well as plates and bottles containing army-issued coffee.

The haul of wartime findings has been taken to the Salisbury Museum where they are now on display.