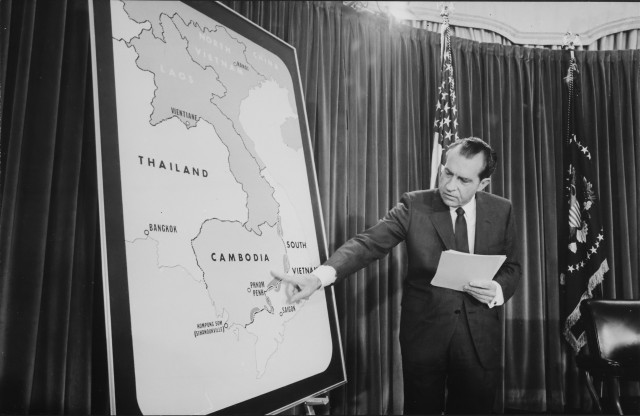 The entire Vietnam War is surrounded in controversy, but the attack on Cambodia is one that seemed the most needless and cost thousands of lives for both the north and south forces.

It is the invasion of Cambodia that made people back home in the US vehemently question the war and why the US was involved. It led to widespread rioting and violence back on US territory.

The truth was that there was no headquarters located in Cambodia. The North Vietnamese leadership was fragmented and mobile with its forces fighting in Vietnam. Nevertheless, at the time the US was determined to take action on the intelligence it had received in order to try to debilitate the enemy and ultimately end the war.

President Nixon ordered his ground troops to invade Cambodia at the end of April in 1970, the Atlas Obscura reports.

US and South Vietnamese troops fought against not only the North Vietnamese army but also Cambodia’s Khmer Rouge when it invaded the country.

Back in the US the invasion was perceived negatively and the operation was stopped after only three months. Nixon lauded the operation as a success and that US troops had been able to infiltrate communist elements operating in Cambodia, but the invasion never located the enemy headquarters that the US had hoped they would find.

The CIA director during the Vietnam War later described the search for the enemy headquarters. He said that the US tried in vain to find a command centre of the North Vietnamese deep in the Cambodian jungle, but that it was never found. He says that the leadership of the North Vietnamese troops was probably only a few commanders and their officers, nothing more.

It is thought that if the Cambodian invasion had continued longer and the US troops were able to scour the country for North Vietnamese then they may have uncovered more than they did. But it was pressure from civilians back at home in the US that drew the invasion to an early halt. Some still believe that there may have been some kind of headquarters complex in the Cambodian jungles.