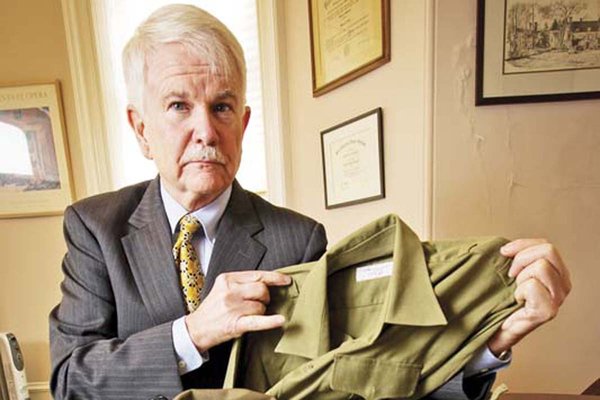 When Dennis was 20 years old he was drafted, and joined the 196th Light Infantry Brigade of the American Division. Murphy was sent to Vietnam in August 1970, arriving in the I Corps Tactical Zone which was on the border of North and South Vietnam.

Dennis Murphy is now Vice President for enrolment Management at Rosemont, a Catholic College near Philadelphia. Dennis was born in Philadelphia in 1950 and grew up in Delaware County. His parents were devout Catholics, and they had six children – money was hard to come by. In a bid to get a good education, young Dennis paid his way through college by working in a weaving mill at night.

Six months after arriving in Vietnam, Dennis Murphy’s unit was involved in a firefight with the Vietcong when one of his comrades was wounded. A sergeant died attempting to help the man to safety, and Dennis made a second attempt. He was hit five times before realising that he couldn’t save his comrade. He managed to escape by first acting as if he was dead and then crawling slowly to safety.

In 1977, Dennis began working as an educational counsellor, and in 2014, he joined the Rosemont College staff. Two months after he arrived, Dennis met Phuong Nguyen, a 27-year-old Vietnamese student who was at Rosemont on a Fulbright scholarship. In the course of their conversation Dennis mentioned that he had fought in Vietnam, and Nguyen told him that her father had done the same – he had been a deputy platoon commander with the North Vietnamese forces.

A series of Skype calls between the two men followed, with Phuong Nguyen acting as translator and in July 2015 Nguyen’s parents arrived in Philadelphia, and over the course of several meetings the two old adversaries gradually formed a friendship.

They swapped their old army uniforms, and Nguyen’s father gave Dennis Murphy a book that explained the war from a North Vietnam soldier’s viewpoint. The uniform exchange was an emotional experience for the men as they realised how hard it was for both of them to make such a symbolic gift to someone who was once a sworn enemy.

Nguyen wrote about her father and Murphy in a writing class, explaining that the meeting between them had given her a better understanding of the meaning and power of tolerance.

She believes that if the two former adversaries could forge a friendship after all these years, anyone can.