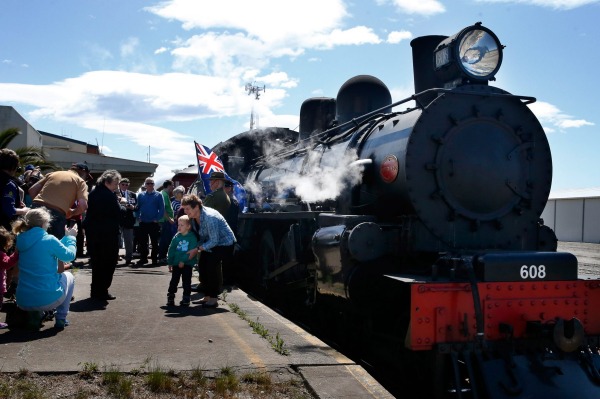 Timaru, New Zealand welcomed the arrival of the Passchendaele, a WWI memorial steam locomotive, on the eve of the centennial commemorations.

The Passchendaele was constructed in 1915 at the Addington Railway Workshops in Christchurch.
It was chosen in 1925 to be named in honor of the memory of workers of New Zealand Railways who lost their lives in World War I.

According to the organizer of the memorial tour, Patrick Healey, it was an important day for the residents of Timaru, who came out in droves to show their support for New Zealand’s fallen soldiers. “There were about 3700 New Zealand casualties, of which 45 officers and 800 men were either left dead or mortally wounded, and this is a way of honouring those who fell,” Healey said.

The whole community came out in support, including representatives of the New Zealand Defence Force, the president of the South Canterbury Returned and Services Association, and Timaru’s deputy mayor, the Stuff.co.nz reports.

The Timaru Pipe Band set the scene as the locomotive pulled into town with over 150 passengers, including people who flew from as far as Australia and the United Kingdom to be there.

The South Island Ab608 Centennial Rail Tour was an emotional journey for all those involved.
One passenger, Judy Barnes, was making the trip in memory of her late husband, a miniature train hobbyist who passed away last year. “I love trains,” Judy said, “but I am doing this for my husband who died last year. He made model trains and our intention was to do this trip together. But now I am doing this for him.”

Organizer Healey’s heart was warmed by the support shown by the entire community, remarking that it was a good opportunity to combine the old and new generations in one spirit. “It is nice to see the younger ones embracing the occasion.”

Not just a photo opportunity, the commemoration was a time to remember and respect the spirit of sacrifice Having the Passchendaele in Timaru, Healey noted, was “something to remember the railway boys”.