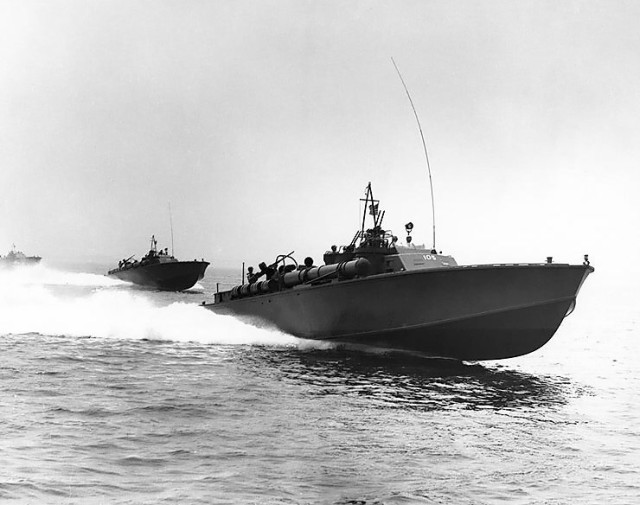 U.S. Navy Torpedoman 1st Class James Nerison was part of the PT-305 crew when they had an encounter with a World War II enemy, that was too close for comfort. It is now more than 70 years later, but Nerison remembers the turn of events with great clarity. He served valiantly aboard the legendary boat patrolling off the coast of Corsica in 1944. It was there that a duo of German destroyers honed in on the PT-305. Even though the Higgins Industries Patrol Torpedo boats had impressive speed and maneuverability, the onslaught of superior Nazi firepower made Nerrison and his crew vulnerable.

Nerison, is now 91 years old, but recalls very specific and detailed information from the nighttime attack. He remembers how his crew fought for 45 minutes to try to shake the Germans, but instead they drew tons of fire. Nerison explained how he secured the torpedo rack that launched torpedoes and then asked the skipper if he should throw over a “smoke pot,” a 5-gallon can filled with chemicals that would release smoke as a distraction to the enemy.

The young sailor received the ‘okay’ before he tossed the container over the side of the boat. This quickly drew fire from the German warships. The PT-305 moved off into the night and was able to elude the Germans.

There were 44 other officers and enlisted men aside from Nerison who spent the bulk of their time on the PT-305 during World War II. Nerison (from California originally) and Joseph Brannan, a former 1st class gunner’s mate who also served on the PT-305, want to return to the boat for old time’s sake.

Kickstarter hosted a campaign launched by the National World War II Museum located in New Orleans. The goal was to raise $100,000 in order to finish the necessary repairs for the PT-305 so that it could sail Louisiana’s Lake Pontchartrain within the year. Museum director Tom Czekanski explained that the funds are needed to cover the transportation costs for getting the boat into the water, testing, and certifications to ensure the boat is fully functional and safe.

The resume of this battle boat is quite impressive; it conducted more than 77 offensive patrols and operations, fought in 11 different actions, and was responsible for sinking three German ships. This all took place over the course of a 14-month deployment in the Mediterranean along the coasts of southern France and northern Italy. Once the boat served its military purpose it was transitioned into a civilian role, operating as a tour boat in the New York harbor, a fishing charter, and an oyster boat. Eventually the boat became unusable, and the museum acquired it in 2007.

The PT-305 has already received more than 100,000 volunteer hours dedicated to its restoration. The volunteers range from students to architects, all working on their own accord to get this historic boat operating fully. In addition to the voluntary man hours, nearly $3 million in donations have funded the restoration. Parts such as engines, deck fittings, and exhaust ports have been taken from other PT boats as well.

Most of the remaining work revolves around the installation of mechanical systems like plumbing lines; the weapons on deck will never be made functional.. Once the boat is ready for the public, revenue must be generated. The hope is that revenue will fund the upkeep in order to maintain the boat for generations to come.

It serves as a tangible piece of history that commemorates, and teaches about the heroes who served aboard the PT-305. The museum, which opened in 2000, is run by executive Vice President and COO Stephen Watson, who stated, “The restoration of PT-305, like all museum restoration projects, is aimed at making history accessible to today’s audiences in as detailed and authentic a way possible.”

Naturally, Nerison cannot wait to see the boat back in action. He feels lucky to have had the opportunity to serve on that boat, and was shocked to hear about the efforts put forth to restore it. Originally, the PT-305 was built by Higgins Industries based out of New Orleans. It was a company that specialized in manufacturing smaller boats.

This particular one was finished on December 8,, 1943 before being assigned to the Motor Torpedo Boat Squadron 22. It was built to withstand heavy torpedo attacks on enemy supply and troop barges and to get away quickly if needed. Czekanski describes the boat as “fast and nimble and a great piece of American ingenuity used in the war.”

PT-305 filled many roles during the war including reconnaissance missions, landing troops on occupied coasts, carrying generals, generally making most of its movements at night underneath the cover of darkness. Despite the lack of railings on the upper deck, no men were lost aboard the PT-305.

Joseph Brannan began his service on PT-305 in December 1944. He is quite excited for the project as well. It was in June 1945 that his and Nerison’s crew returned to New York all the way from the Mediterranean. The war concluded before the PT-305’s deployment to the Pacific arrived.

Nerison, remembers that the crew’s quarters on the boat were stuffy when they were based in Saint Tropez in southern France. This was at the time that fighting had started to decrease. He was able to find some brass portholes at a local boatyard before going to the skipper to ask about installing one on each side of the boat. Sure enough, the stuffiness was gone. This was a very clever modification that likely was unique to only this Navy PT boat at the time.

Only a handful of PT boats remained after the war. The Navy had destroyed around 118 boats off the coasts of the Philippines to mitigate its fleet size. The PT-305 was one of the only ones to survive before being sold as a military surplus along with the rest of the squadron for a measly $10. When the PT-305 transitioned to civilian life it received some much needed work. For example, 13 feet from the stern was removed to decrease the operating costs and to comply with Coast Guard regulations.

In April 2007, Czekanski headed to the Defenders of America Naval Museum in Galveston, Texas, to retrieve the PT-305. The original restoration team painted a set of eyes on the front of the boat. It is a metaphor (or a nautical legend) that the eyes help the boat find its way home. But, Czekanski made it clear that was no longer necessary. This PT-305 was finally home.