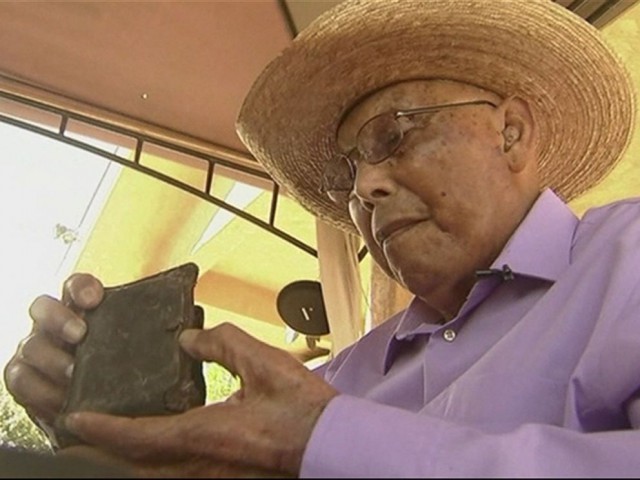 A wallet that was left in Austria during World War Two has been returned to the US veteran who lost it more than 70 years ago.

The US Army veteran, Eligio Ramos, who is now 91, is living in California near the town of Fresno. In 1945, Eligio was deployed with his platoon from the 250th field artillery in Austria, deep in the heart of what had been Nazi-occupied territory.

One night a local Austrian man had offered to let the soldiers stay in his farmhouse for the night, as they made their way through the country rescuing and liberating prisoners from the Nazi concentration camps. That night Eligio prepared to bed down, when he tucked his wallet underneath one of the floorboard next to him for safekeeping. However he never remembered to pick it back up the next morning when his platoon left.

Eligio thought that he’d lost his wallet for good, but 70 years later he received a letter from a Dr. Josef Ruckhofer, whose grandfather had been the local man who let the soldiers stay in his farmhouse. When he died, he left the farmhouse to his grandson Josef and it was when Josef was cleaning out the house that he came across Eligio’s wallet, the ABC News reports.

Eligio’s daughter, Sylvia was sorting through her father’s mail, when she opened the letter and could not believe what Dr Ruckhofer had found. Sylvia said that she told her father with much excitement that someone had found his wallet in Austria.

Eligio’s son Rosando then got on the trail of getting the wallet retrieved and got in touch with Dr Ruckhofer. The wallet was eventually sent back to Eligio and the family were excited to discover what was still inside at a family reunion to celebrate the lost wallet at Fresno’s Veteran’s Hospital.

The wallet contained a real time capsule of photos of family and babies, who are now in their 70s. It also had Eligio’s military information including his ID. It also held receipts for money orders that Eligio had sent home to his family in America.

Rosando said that a value can’t be put on the wallet, and that it is priceless to his family.

Eligio’s family now intends to have all of the wallet’s contents framed and kept for their next generation, so that they can learn about Eligio’s role during World War Two.