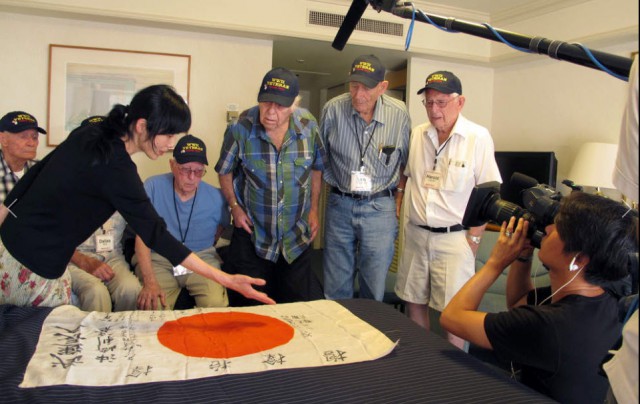 World War Two veterans who took part in the Pacific theatre of war are returning Japanese good luck flags they took more than 70 years ago.

Three US servicemen – Vern Thompson (92), Eldon Shields (90) and Paul Boeger (89)– have returned to Japan where they were stationed for a time during the war. They took with them Japanese good luck flags that they’d taken home with them as a memento after the war.

The three veterans are all from small towns across the United States, and wanted to return the good luck flags they took to the families and descendants of Japanese soldiers as a symbol of reconciliation.

They organised a trip to fly out from Seattle and head to Tokyo for the handing over ceremony, regardless of their age. Eldon served in the US Marines during the war and commented that he is no hero and wants to return the flags to ease the bitter memories and pain he still has of the war days.

The good luck flags are called yosegaki hinomaru in Japanese and it was common for US and other Allied soldiers to take them from the battlefield.

The flags are made of silk and were around three foot by four foot. Right in the centre was a large red circle which is the Japanese interpretation of the sun. Japanese soldiers would have their families and children sign them or place hand prints on them before they went off to war for good luck. They were easily folded up and kept in soldier’s pockets.

The US veterans first returned the flags to Japan’s Prime Minister, Shinzo Abe and other officials who were at the ceremony to represent Japanese families. The ceremony took place at the beginning of August, The Register Guard reports.

For the Japanese people, the flags are like they are getting the spirit of their loved one back, so it is a symbol of closure for those they lost during the war.

The trip was organised by a charity called OBON 2015, which was set up in order to try to get some of the good luck flags returned to Japan.