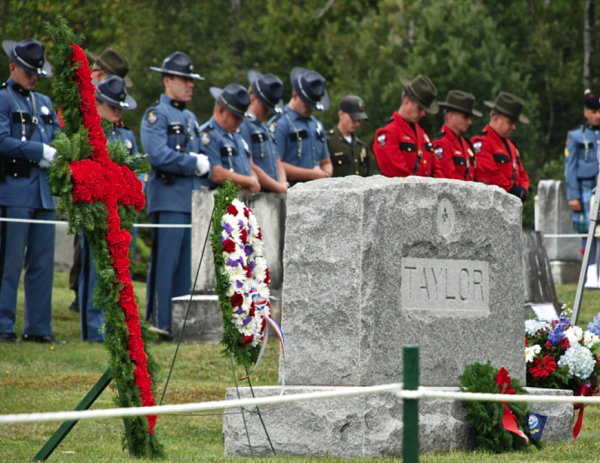 Fifty years after being shot down during the Vietnam War US pilot’s remains have finally been returned home to the town of Rangeley in the United States.

Lieutenant (junior grade) Neil Brooks Taylor was 25 years old when he was shot down over Vietnam and was on his 68th operation over the country.

He was buried this week at the Evergreen Cemetery in his home town where hundreds gathered to honor and commemorate the pilot.

It was in September 1965 that Neil died in his plane over the Mekong Delta, 49 years later at the end of 2014 Neil’s sister, Ann, was told that a DNA match had been positively connected to her brother Neil after remains had been discovered in Vietnam.

Among the mourners at his funeral were Maine’s governor and first lady, along with US Senator Susan Collins and US Representative Bruce Poliquin. It was held with full military honours on exactly 50 years to the day that he died.

His home town had been decorated with ‘Welcome home Neil’ signs and a procession was led through the town prior to the funeral by students who were allowed the day off school to attend.

The town’s fire department flew US flags near the entrance of the cemetery and most attendees took along small flags of remembrance.

The funeral had been organised by the town’s manager, head of the fire department and State Senator Tom Saviello. They had organised the folding of the flag and its presentation to Ann and her family followed by a rifle salute and even a three Navy jet fly past.

The reverend said that this service was a celebration of Neil’s life because he had finally come home.

Neil had been born in 1940 in the nearby town of Farmington after which his family moved to Rangeley. He graduated from high school there in 1958 and went on to study metal engineering working for General Electric. It was in 1962 that he enlisted in the Navy as a cadet. After training he went on to join a fleet squadron based in Japan, the Daily Bull Dog reports.

Neil flew a Douglas Skyhawk and was honoured with many medals of honour and a citation for showing skill and professional conduct whilst under fire. It was on his 68th mission that he was shot down over South Vietnam and died in the crash. Neil’s parents died in the 1980s but luckily Ann was still alive to receive his remains this year.

Ann and her family were given the US military’s Silver Star and Gold medals for Neil’s service and bravery during the war.