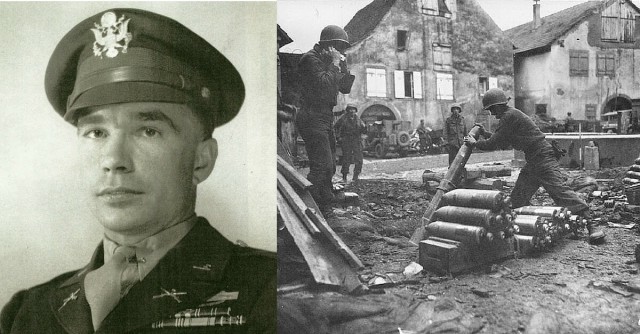 Richard Chilton, a US veteran of the Korean War, while performing investigations into an unrelated matter, recently stumbled upon an interesting but entirely untold story.

Because of Chilton’s research, facts have emerged about the Second World War heroics of an almost forgotten US soldier who served in France in the closing months of the war. That soldier was Garlin Murl Conner, and Chilton and others who have learned about Conner’s life story are determined to see that he receives proper recognition for his sacrifice. Furthermore, they have campaigned for him to receive the United States’ highest award for bravery, the Medal of Honor.

Richard Chilton had been trying to find out more about his uncle, Gordon Roberts, who was sent to Europe towards the end of the Second World War and had never returned home. Chilton is now 82, when he was about 60, he began making inquiries into the fate of his uncle. He investigated what he could about the division his uncle had served in, which had suffered greater casualties than any other US division. He tried contacting as many of the division’s survivors as he could, but none of his leads yielded any information about his uncle.

In the course of these contacts, someone brought up the name of Garlin Murl Conner. Chilton tried to contact Conner and after a while he received a phone message from Conner. In the message, Conner said he had known Chilton’s uncle, and that he had been killed in a firefight. Conner said he’d contact Chilton, but they were never to speak to each other. When Chilton tried writing to Conner, he was told by Conner’s wife that Conner could no longer speak, having just suffered a severe stroke.

Chilton asked Pauline Conner if he could visit Conner, hoping that direct contact between the two might help. Nothing came of this meeting, but Pauline Conner invited Chilton to go through a collection of her husband’s papers. There wasn’t anything in the box about his uncle, but what Chilton read there astounded him. He discovered that Garlin Conner had been a highly decorated soldier, with more decorations that any other soldier Chilton had known. Among the facts that Chilton found was that Conner had fought with valor in France in 1945, saving his battalion from certain defeat and killing at least 50 enemy soldiers.

Chilton took up a new cause. He decided to try to get Conner’s heroism recognized with a Medal of Honor  – the highest American award for bravery. Chilton took up this mission in 1998, and although he has not yet succeeded, he is determined to do so and feels he is closer than ever to securing the proper recognition for Conner. He had contacted and addressed many military review boards and law courts.

In the meantime, Conner died in 1998, aged 79. He had never said much about his war service. The box of papers that Chilton looked at revealed the full story of his record. He was wounded many times, and his actions had earned him Silver Stars, Bronze Stars, Purple Hearts and the DSC (Distinguished Service Cross).

Then near the French village of Houssen, on 24th January 1945, the wounded Conner slipped away from the hospital where he was confined. Earlier that day, Conner, who had been badly wounded in the hip, sneaked away from a field hospital and made his way back to his unit’s camp.

His commanding officer was seeking a volunteer for a suicide mission: Run 400 yards directly toward the enemy while unreeling telephone wire all the way to trenches on the front line. From that point, the volunteer would be able to call in targeting coordinates for mortar fire., Conner grabbed the spool of wire and took off amid intense enemy fire.

He made it to the ditch, where he stayed in contact with his unit for three hours in near-zero-degree weather as a ferocious onslaught of German tanks and infantry bore down on him.

My God, he held off 600 Germans and six tanks coming right at him,” Chilton marveled. “When they got too close, his commander told him to vacate and instead, he says, ‘Blanket my position’

The request meant Conner was calling for artillery strikes as he was being overrun, risking his life in order to draw friendly fire that would take out the enemy, too, during which time he directed his men for three hours by telephone. During the action, Conner killed 50 German soldiers with return fire. Lt. Harold Wigetman credited Conner with saving the 3rd Battalion.

He was wounded seven times. After his unit was sent to occupied Austria, Conner was sent back to the U.S. for rest prior to being sent to fight in the Pacific theater. The War ended before he could be sent overseas a second time. During his service, Conner received a battlefield commission as a second lieutenant and was subsequently promoted to first lieutenant.

Nearly 500 Americans have been awarded the Medal of Honor for extraordinary service in the Second World War. Although Chilton has not yet managed to get the authorities to agree to the awarding of one, posthumously, to Conner, he says he will not stop until he has achieved his goal.

Recommendations have gone back and forth many times, sometimes winning approval, on other occasions being rejected out of hand, but slowly more and more support for Chilton’s campaign is being heard by various offices and authorities. It is only a matter of time before the late Garlin Murl Conner finally receives the recognition he deserves.